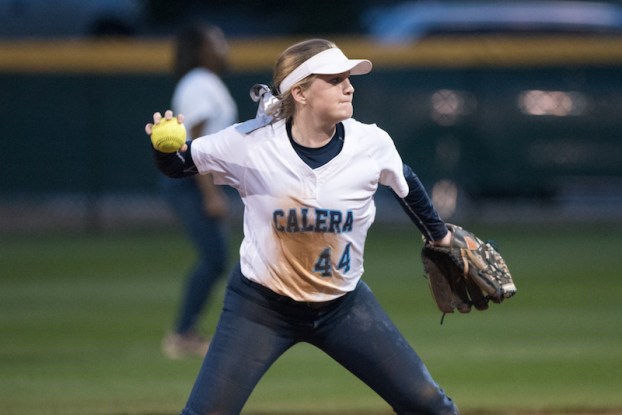 MOUNTAIN BROOK – The Calera softball team seemingly had bats made of fire on Monday, March 12, when they traveled to Birmingham to take on the Mountain Brook Spartans.

After losing three straight games, the Eagles have responded in dominant fashion with two consecutive wins by a combined score of 22-2, including a 16-1 thumping of Class 7A opponent Mountain Brook on Monday night.

Calera (5-4) jumped all over the Spartans with an 11-spot in the top of the first inning to sew up the game from the start thanks to the team’s hot hitting at the plate.

The Eagles used four singles, a double and a triple to score five runs before an out was even recorded in the inning. Even the first out, a ground out from Cameron Oddo, wasn’t enough to keep Calera out of the scoring column as it also allowed a run to cross the plate.

Calera went on to score five more runs after that first out was recorded thanks to three singles, a double and another RBI ground out to give the team an 11-0 advantage before Mountain Brook had even stepped to the plate.

The Spartans added their one and only run in the bottom half of the inning with an RBI-single from Lauren Gilbert.

The Eagles’ bats also cooled down a bit through the second and third innings, but they were back to close the game out with five combined runs between the fourth and fifth.

Oddo was able to lace a two-out double to left field with one out to put Calera in business. After a pop out, Charley Clark stepped to the plate and hit a deep fly ball over the left-field wall for a two-out, two-run homer to give the Eagles a 13-1 lead.

In a similar situation with two outs in the top of the fifth, Calera put together a single and an error to put two runners on for Fayth Bryant.

Bryant stepped up to hit the Eagles’ second home run in as many innings, hers being a three-run shot to put Calera up by the final score of 16-1.

Bri Plocharczyk got a complete-game win in the circle by tossing all five innings and allowing three hits and one unearned run. She also walked four batters, but struck out three.

Clark and Bryant both had unbelievable games at the plate as each finished 3-for-4 with four RBIs. Clark scored three times, while Bryant scored twice.