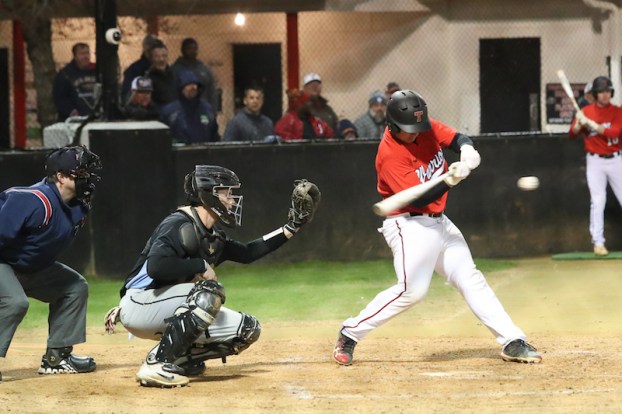 Thompson was able to pick up its biggest win of the season on Monday, March 12, by taking down previously unbeaten Oak Mountain. (For the Reporter/Dawn Harrison)

ALABASTER – The Oak Mountain Eagles were a perfect 14-0 on the baseball diamond this season and had earned a national ranking of No. 7 in the MaxPreps National High School Baseball Rankings heading into a Monday, March 12 matchup with Thompson.

Thanks to a combined four unanswered runs from the Warriors between the bottom of the fourth and fifth innings, that perfect start for the Eagles came to an abrupt end with a 5-3 road loss.

Much to the delight of the home fans, Thompson has been an up and down team, but showed on Monday they can compete against the best in the state.

The breakout performance from Thompson (6-5) was due to a combination of Sam Pearce on the mound and an array of different players at the plate as four different batters picked up an RBI and six picked up a hit.

For the first time this season, the Warriors are now above .500 thanks to not just two consecutive wins, but wins in five of their last six games. Their only loss in that time span is 6-3 to defending 6A state champ Helena.

Thompson struck quickly with a run in the bottom of the first inning thanks to aggressive and smart base running from Myles Brown.

Brown, the leadoff hitter, got aboard thanks to being hit by Oak Mountain pitcher Hunter Hall.

During the next at bat, he was able to steal second, before a ground out from Nick Freeman moved him over to third. J.C. Parker stepped to the plate and was able to hit a fly ball deep enough to left field to allow the speedy Brown to cross the plate for an early 1-0 Thompson lead.

That was all of the scoring for the first three innings of the game as Pearce locked in on the mound for the Warriors, while Hall settled down after hitting the first batter he saw.

The low-scoring affair drastically changed in the fourth inning as the two teams combined for five runs starting with Oak Mountain’s three in the top half of the inning to take a two-run lead.

After an opening strike out from Pearce, the Warriors had one down in the inning.

Landon Cato and Gene Hurst were both able to reach on an error and hit batter, respectively, during the next two at bats, however, to put two runners aboard.

After an Andrew Heiberger ground out advanced both runners into scoring position, Dylan Fraser doubled on a line drive to left field to bring both in to score for a 2-1 Eagles’ lead.

Two batters later after Kade Sanders was hit by a pitch, Caleb Kennedy picked up the second hit of the inning with a single to center field that brought Fraser in to score.

The three runs scored in the top of the inning gave Oak Mountain a 3-1 lead.

It was a lead that didn’t last long at all thanks to a two-run bottom half of the fourth from Thompson.

Breydon Edmondson was able to reach base with an error to lead off the inning for the Warriors.

After an out and a Sawyer Pate single, Thompson had runners on first and second with one out. That was followed by a ground out from Pearce that put two outs on the board, but moved both runners into scoring position.

With one swing of the bat, Nick Walker wiped the Warriors’ deficit off the board by doubling on a line drive to center field that brought both Edmondson and Pate into score to tie the game 3-3 at the end of the inning.

After a 1-2-3 inning in the top of the fifth, Thompson came back to the plate and added two more runs to break the tie for good.

An RBI-double from Grayton Arrington and a sac fly from Edmondson brought in two runs during the bottom of the fifth to give the Warriors a 5-3 lead.

Pearce allowed one more base runner the rest of the way to hold on for the complete-game win on the mound. He allowed five hits and three unearned runs, while striking out six batters.

No batter picked up more than one hit for Thompson, but Walker posted two RBIs.

Oak Mountain (14-1) got hits from five different players, while Fraser led the team with two RBIs.