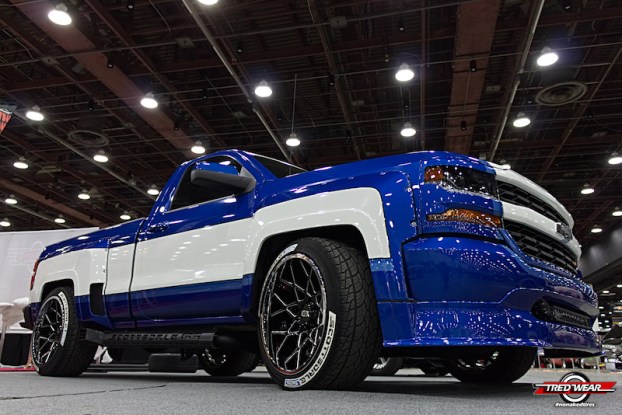 The "Scottsdale SS," a 2017 Chevrolet Silverado that was remodeled by Tred Wear of Columbiana, took first place in the contemporary truck category of the Detroit AutoRama car showcase. (Contributed)

Vehicle customization shop Tred Wear entered two of its best vehicles in the Detroit AutoRama car showcase from March 2-4. Co-owner Lee Clayton said he and co-owner Michael Hunt were familiar with the Detroit AutoRama, but has never competed before this year.

“We go around and work the show every year, but we felt that we needed to bring (our) cars to show off our capabilities,” Clayton said.

A remodeled 2017 Chevrolet Silverado known as the “Scottsdale SS” won Tred Wear first place in the contemporary truck category. Clayton said Tred Wear installed a widebody on the vehicle, lowered it and gave it a new paint job before it was entered.

“There was nothing else like it there,” Clayton said. “It was the best contemporary truck there. We took something that everyone is used to beating around, and turned it into something extraordinary.”

According to Clayton, Tred Wear was first established on Mildred Street five years ago, and started out selling tire graphics after manufacturers quit using white lettering in tires.

The business later expanded to offer a widebody kit known as Chicanery, which is available for later Chevrolet Silverado models and C-5 Corvettes. Clayton said the kits make trucks look sporty and unique, and increases their value without increasing insurance rates.

Tred Wear now works with dealers and distributors throughout the United States and on every continent.

More information about Tred Wear’s vehicles can be found online at its website, Tredwear.com.

UPDATED: Vehicle fire stalls traffic on I-65 south in Pelham

PELHAM – Pelham Fire Chief Tim Honeycutt said there were no injuries during a vehicle fire that had traffic on... read more