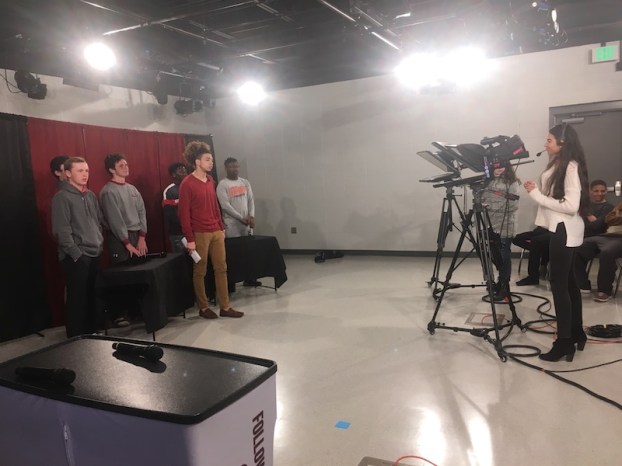 THS TV members film the intro to an episode of the Warrior Mash-Up game show, which is produced every Wednesday. (Reporter photo/Amalia Kortright)

ALABASTER – Members of THS TV at Thompson High School have found a new way to practice their broadcasting skills while having some fun with their classmates.

On Wednesday, March 7, THS TV produced its third episode of Warrior Mash-Up, which is modeled after popular game show “Heads Up!” According to THS TV Sponsor Brooke Dennis, the show airs every Wednesday.

The rules of Warrior Mash-Up are simple. One partner faces away from a large screen that displays different words from different categories and has to guess as many words or phrases that the other partner acts out or hints at within 60 seconds.

Warrior Mash-Up producer and junior Lizzie Milstead said the game is divided into three rounds. The first round features words that are THS-related, the second covers pop culture and the third typically requires acting the words out.

THS senior Grant Bivins, whose team represented the THS football team, said he had fun being on the show and was glad they won.

“I was doing a couple of dance moves and helping my team get the ‘W’,” Bivins said. “I was a little nervous, but I feel great. My performance was a nine out of 10.”

As producer, Milstead said she plans the show ahead of time, writes the script and manages the categories for each round.

THS TV camera crew member and sophomore Savannah Force said a lot of work goes on behind the scenes before and during the filming.

“Usually, we have three to four people making graphics. Two people do a script. We do a run-through the day before,” Force said.

Dennis said the idea to produce a game show came from a trip to Auburn University a few years ago.

“We were taking a field trip to Auburn, and they were doing a Family Feud type game,” Dennis said.

While many high schools have student-led newscasts, Dennis said THS TV is the only school broadcasting program she knows of that does extra programming on a regular basis.

“We have a very unique program. Several other programs have a newscast, but we’re developing all types of programs throughout the day,” Dennis said.

According to Dennis, Warrior Mash-Up is another opportunity for her students to gain more experience with broadcasting while also developing teamwork skills and learning from their mistakes.

“It’s a class, so they’re learning. It’s a great experience for them to take a show, develop it and bring it to life,” Dennis said. “Each week, they get a little bit better, and that’s our goal.”

Warrior Mash-Up, along with other THS TV programs, can be viewed online on the class’s Youtube channel or at Thslive.com.

Who are ACS’ Nationally Board-Certified teachers?