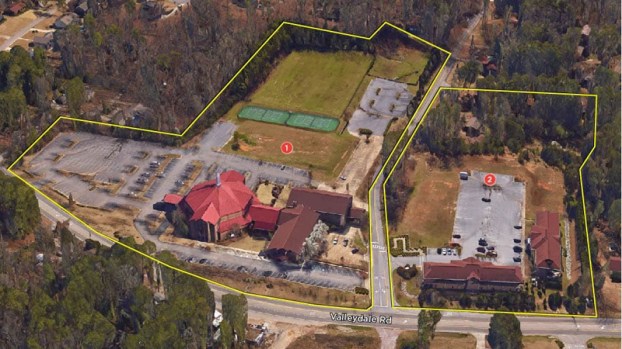 Some of the property includes classrooms, a sanctuary, a kitchen and dining space, as well as a location for sports including football, tennis and basketball. (FOR THE REPORTER/GRAHAM AND CO.)

NORTH SHELBY – The property formerly occupied by Southeastern Bible College has been put on the market for a total of $7.5 million.

Ogden Deaton with Graham and Co. said the property is unique because it is a desirable location with a large percentage of the property being office, classrooms, playing fields, dorms and has a sanctuary.

Deaton said the property could be used for a church, school, institution, office or nursing home.

On June 1, 2017, Southeastern Bible College suspended operations because of lack of resources.

SEBC’s Board of Trustees voted to suspend operations, due to the evaluation of the institute’s financial resources, projected cash flows, strategic challenges and possible solutions to generate funds needed to support operations, according to a release posted at the time of the school’s closure.

The evaluation concluded that the college, which operated for 82 years, did not have sufficient resources to meet its obligations.

The school’s main campus has 16 acres and 87,000 square feet of kitchen and dining space, three elevators, athletic facilities including a football field, basketball and tennis courts, a sanctuary that seats 825, striped parking for 460 cars, and classroom space.

The second site listing includes two dorms built in 2005 that include more than 26,000 square feet, one house with 1,100 square feet, four acres, and striped parking for 128 cars.

Deaton said since the property was put on the market there has been interest but no offers.

Southeastern Bible College, described as “a higher education community that connects students who have a passion and call to ministry with an academically rigorous, biblically-based learning environment,” was founded on May 1, 1935 by Harry Ironside.

The school began in a two-story house before moving to Pawnee Avenue in Birmingham in 1947. In 1988, the college moved to Mountain Brook before moving to its current location in North Shelby County in 2004.

The school’s current location was built between 1978-1993, according to information from Graham and Co.

Southeastern Bible College has since merged with Piedmont International University in late 2017.