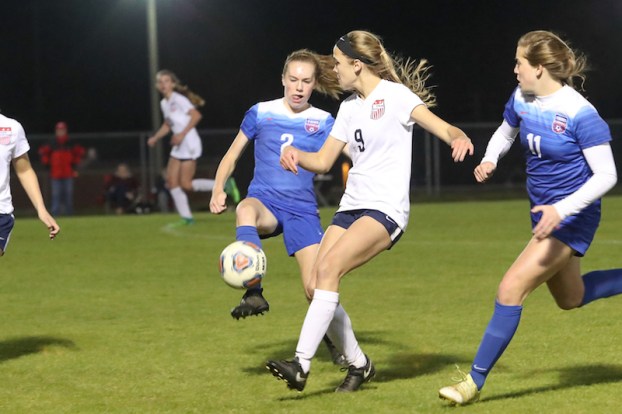 Oak Mountain's girls soccer team fell 4-2 to Vestavia on Tuesday, March 12, but had chances to win the top-3 battle as well. (For the Reporter/Dawn Harrison)

NORTH SHELBY – Two of the best girls’ soccer teams in the state treated a nice crowd that braved the cold at Oak Mountain High School to an entertaining game when No. 3 Vestavia traveled to take on No. 1 Oak Mountain on Tuesday, March 13.

It marked a rematch of last year’s Class 7A semifinal that the Rebels won 2-0 to advance to the state championship game.

Coming into this year’s first matchup between the two teams, the Rebels had lost just one game way back on Feb. 15 against John Carroll by a final of 1-0.

Oak Mountain on the other hand hadn’t lost a regulation game this season playing to a tie against Bob Jones and a tie against Parkview (GA)—a game they eventually lost 5-3 in penalty kicks.

It set up a rematch of premier teams in the regular season that definitely sparked the interest of both power house fan bases as the Eagles looked for the redemption win.

Vestavia, however, shook off the nerves of an intense regular-season game early and put the first goal on the board less than two minutes into the game to take a quick 1-0 lead.

The Rebels got the next chance on a free kick near Oak Mountain’s goal, but couldn’t get the shot to go.

Hailey Whitaker took advantage of the missed opportunity by Vestavia and started attacking. She got several looks, but was unable to get anything to go and then she passed off to teammate Julia Pack, who got a look as well, but was also unable to put a goal home.

The aggressive play by Oak Mountain earned them a free kick shortly after, however, and Danielle Retief was able to eventually find the back of the net for the equalizer.

The Eagles had a couple of good chances to take the lead shortly after on a corner kick that didn’t end in a score and a beautiful cross from Retief to Bentley Stroupe that sailed just over the crossbar.

Vestavia had one more corner in the half, but couldn’t capitalize, which led to a 1-1 halftime score.

Almost identically to the first half, the Rebels came out with a purpose and landed the first blow of the second half with a penalty kick in the Oak Mountain box that gave Vestavia a 2-1 advantage.

The Eagles were much quicker to respond this time around, however, as a corner kick eventually found Retief for her second equalizer of the night thanks to an assist from Whitaker.

Oak Mountain had another corner chance shortly after, but Stroupe’s shot on goal sailed just over the cross bar.

With the Eagles now getting several good looks in a row, Vestavia turned up the pressure and started getting good looks of its own. It didn’t take long before the Rebels were able to find the back of the net again for the go-ahead goal with 27 minutes remaining.

With a little more than five minutes left, Oak Mountain had an extremely hard-fought possession putting several shots on goal, but they were unable to get any of the shots into the back of the net.

With about a minute remaining, Vestavia put the icing on the cake with one final goal to take the win by a final score of 4-2.

The Eagles (9-1-2) now have area matchups with Spain Park and Mountain Brook set for the week before spring break on March 20 and March 22, respectively.