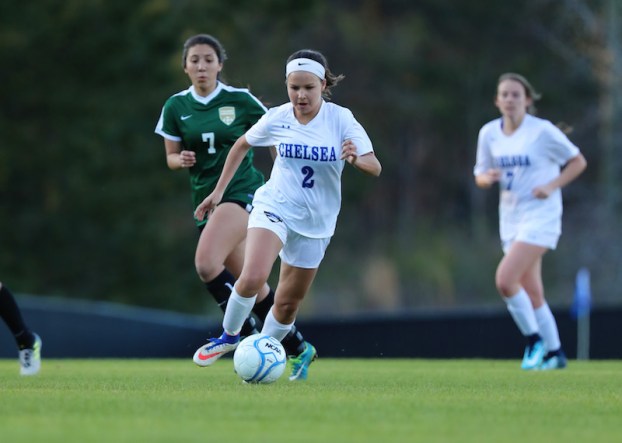 Chelsea picked up a crucial area win against a very hot Pelham team on Tuesday, March 13. (For the Reporter/Cari Dean)

The Oak Mountain Eagles made short work of the Helena Huskies on the road Monday night, March 12 in a dominant 4-0 victory.

The Eagles (5-2-4, 2-0) scored all four of their goals in a 20-minute period and cruised from there as the second team played much of the second half.

Those first four goals were scored by John Long and Cody Wells, who had one apiece, and Jackson Murphy, who put two scores on the board in the half.

The first of two wins in a row and three games in a row for the Spain Park Jaguars was a 2-0 victory against Thompson. The Jags had lost three straight games, but have now won two straight after beating Chelsea the next night to improve to 5-6-1 overall.

Pelham’s tough schedule continued as they took on Class 7A No. 3 Hoover on Monday, March 12. It marked the defending 6A champ’s second straight road loss moved them to 5-4-3 overall this season, but they’re still 1-0 in area play.

In the first of back-to-back-to-back games as part of the metro tournament, Chelsea fell 2-1 to John Carroll to snap a three-game winning streak.

Chelsea is 5-4-2 overall this season, but more importantly 1-0 in area play ahead of difficult second half of the season.

Briarwood’s hot stretch continued with a 6-0 win over McAdory on Monday, March 12, as the Lions won their seventh consecutive game to improve to 9-2-1 on the season.

They are also already 4-0 in area play and are beating teams by an average of 6.8-0.3 in their seven-game winning streak.

Calera’s 2-1 loss to Shades Valley marked the ninth of the season as they have yet to win a game this year and are 0-9-1. The Eagles have picked up a 2-2 tie against Montevallo and have lost three games by two goals or less and four by three goals or less.

Montevallo picked up its ninth win of the season with a 3-2 victory over Holtville to move to 9-2-2 through 13 games. The Bulldogs have won or tied in six of their last eight games.

Indian Springs has played two games this week tying with Shades Valley 2-2 and beating Clay-Chalkville 2-1 to improve to 8-2-2 on the season as they look to defend their state championship.

In possibly the biggest game of the week, Chelsea stepped up in a big way to shutout Pelham 5-0 in an area matchup.

The Hornets moved to 2-0 in area play, while Pelham is now 1-1 in area play. The two look like they will finish as the top two in the area to make the playoffs, making this battle critical for the regular-season championship.

Pelham was 9-1 coming into the game as Chelsea snapped their three-game winning streak. The Hornets have now won four of five only giving up goals in the loss during that span to improve to 6-3-1 overall.

After losing three games in a row, Helena finally got back on the winning track by taking down Calera 6-2. The Huskies are now 5-6-1 overall, but 0-2 in area play meaning they need a strong second half including big area wins with only two games left against Chelsea and Pelham.

Montevallo has alternated wins and losses over the last few weeks, but on Monday, March 12, the Bulldogs picked up their sixth win of the season to improve to 6-5 overall.