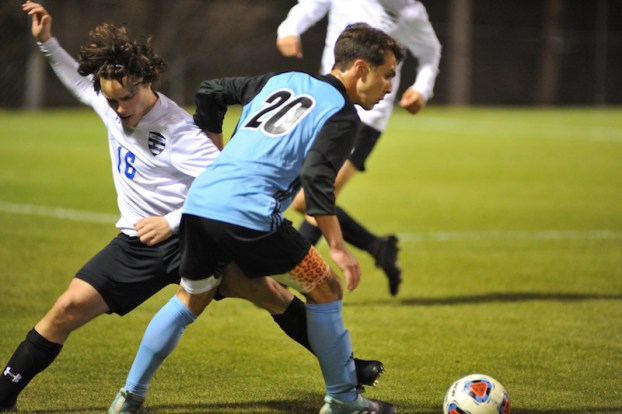 Spain Park was able to pick up a strong win against Chelsea on Tuesday, March 13, thanks to aggressive play on both sides of the ball. (For the Reporter/Larry Dancy)

The victory moves the Jaguars back to .500 with a 6-6 record in 2018 despite playing one of the more difficult schedules in the state.

The Jaguars wasted no time scoring in the third minute off a corner kick when Reece Eberhardt found Brooks Rice at the top of the box.

Rice, after a few moves, sent a beautiful shot into the right corner of the net for a quick 1-0 lead.

Chelsea was next to draw blood and did so off a free kick from 40 yards out as Lando Nichols pounded a shot through the fingers of goalkeeper MJ Dimbo.

The Hornets were hemmed in the remainder of the evening getting off nine shots, but didn’t threaten beyond that.

Another chance at a corner kick yielded the same result for the Jags as Brooks Rice found Sam Marino, who kicked a nifty left footer into the net for the go-ahead goal.

Spain Park was relentless on offense, particularly in the first half where the Jags got off 16 of their 24 shots for the game.

However, only five of those came on goal before halftime as the Jaguars struggled with their accuracy even on easy opportunities.

Fortunately, there was plenty more.

SPHS scored quickly again in the second half with Rice leading the way.

Reece Eberhardt found him again streaking down the field after winning the ball at midfield. Rice was just outside the penalty area when he sent a burner into the goal for a 3-1 lead.

Now it was time to return the favor.

With the game in hand, Rice dribbled past midfield and threaded the needle on a beautiful pass to Eberhardt, who quickly controlled and chipped the final goal past an advancing goalkeeper.

Rice finished the night with two goals and one assist, while Eberhardt added one goal and two assists.