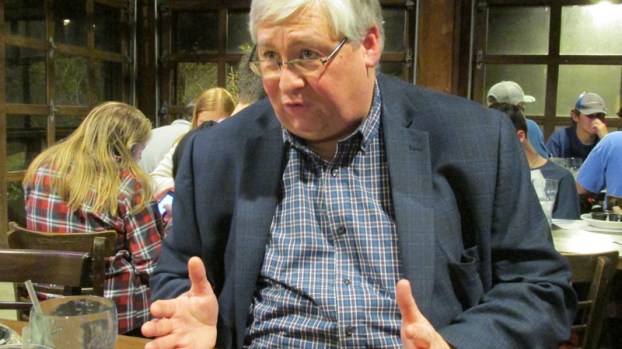 Linwood Bragan of the Crosswinds Foundation spoke to the Great Birmingham Teenage Republicans Club at Logan’s off U.S. 280 on March 8. (FOR THE REPORTER/MICHAEL BROOKS)

NORTH SHELBY – Linwood Bragan of the Crosswinds Foundation insists people aren’t mad at God, but many seem exasperated with the church. He’s part of an organization trying to get the church back on course.

“The Pilgrims really wanted to come to Virginia, but the crosswinds got them 600 miles off course,” he said. “They landed in New England and had a hard winter. Crosswinds are still with us.”

Bragan spoke on March 8 to the Greater Birmingham Teenage Republicans Club at Logan’s Restaurant off U.S 280. His focus was his organization’s latest project, the “Honoring the Code: Warriors and Moral Injury” documentary released two years ago.

“Our first documentary, ‘Invisible Scars,’ dealt with the effects of PTSD,” he explained. “Our newest documentary takes this a step further. Many veterans suffer moral injury because they had to do things in combat or believe they failed to do something in combat, like protect a fellow soldier. They struggle with forgiving themselves and valuing life.”

Bragan said 58,000 Americans died in Vietnam, but four times this number of veterans have died since by suicide.

“Most of the suicide victims are men age 60 and above,” he said. “A Los Angeles Times story found that female veterans are 12 times more likely to take their lives than the general population.”

Bragan said veterans can “internalize” their hurt, and it can surface through a memory, an odor or a noise, such as thunder or fireworks.

“Some veterans experience hurt years after combat when memories come flooding back,” he said. “One Desert Storm vet was excited about the swift victory in Kuwait but had feelings of remorse when he saw footage of an Iraqi soldier ‘burned to a crisp’ in a tank. His feelings of joy gave way to despair.”

The “Moral Injury” documentary gave another example of an American solider in Vietnam who searched the body of a Viet Cong soldier. The American opened the dead soldier’s wallet and saw a photo of his wife and child. He said he felt such grief that he never searched a body again.

“After a bombing run, one bomb was lodged in the bay,” Bragan said. “The fuse was lit, and the bomb had to be shaken loose. The airmen were able to dislodge it over Austria and were horrified to see it strike a farmhouse below. McGovern carried the memory of this with him for many years until he was contacted by the family when they saw him talk about this on television. The family was in the barn when their house was destroyed, and they were all fine. McGovern struggled all of his life until this contact was made.”

Bragan said caring family and friends can do several things to help vets.

“First, don’t ever ask a vet about combat exploits, unless they volunteer. Be a friend to a vet. Simply saying ‘welcome home’ is something many long to hear,” he said. “Listen to them. Encourage them to get with other vets in support groups. And be sure they get a copy of this documentary.”

Bragan said the latest documentary highlights the power of forgiveness and faith in the lives of veterans.

“There is hope for healing,” he said. “Moral injury isn’t responsive to medication, but studies show the positive results of faith. Those who struggle with shame or guilt can know grace and healing.”

Bragan, a Huffman native, earned degrees at the University of Alabama and the Cumberland School of Law. He was a congressional staffer in Washington and more recently served as counsel in Alabama Gov. Bob Riley’s State Banking Department.

Bragan said “Warriors and Moral Injury” is provided without cost to veterans through the organization’s sponsors and supporters. Crosswind’s website is crosswindsfoundation.org.

The Greater Birmingham Teenage Republicans Club was founded in 2012. Denia Petruzella is founder and adult advisor. The group’s Facebook address is @GreaterBirminghamTeenageRepublicans.