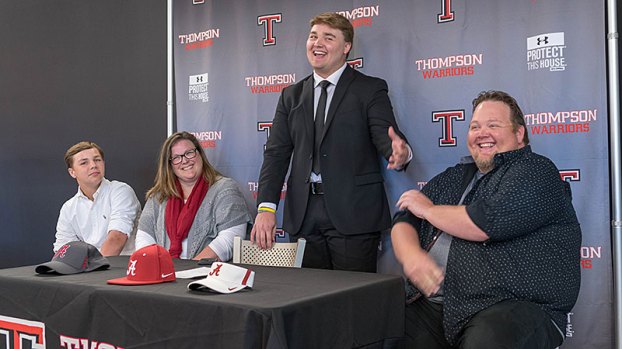 ALABASTER – A Thompson High School offensive lineman will be suiting up in crimson and white next fall after he signed a preferred walk-on offer from the Alabama Crimson Tide on March 14.

Alex Pearman signed the PWO offer from Alabama during a ceremony in the THS cafeteria while surrounded by friends, family members, coaches, teammates and THS administrators.

“I want to thank God, because without him none of this would be possible. I want to thank my parents for supporting me and pushing me to be the best man possible,” Pearman said. “Thank Coach Freeman for coming in and turning around an entire program. I want to thank all my friends and my family also. Roll Tide.”

“This guy is an easy sell. We need more of him in our program,” Freeman said. “He had a lot of things come open there toward the end, and we got to looking at it. Sometimes God has a plan and we have to keep searching on that plan. There was a bigger plan for him. Where he was fixing to be, personally, I felt he was getting short-changed. We just went to work a little bit to try to open some doors, and God opened some doors.

“What a special day for Alex and the entire Pearman family. We are proud of him, not just for this opportunity, but for what he represents,” Hester said. “Hard work and grit and determination and the demeanor he has and the way he goes about doing things – I’ve got a 12-year-old son and I would say that’s the way I’d want my son to do it too.”

By ALEC ETHEREDGE | Sports Editor  ALABASTER – The Pelham-Thompson rivalry is a special one and one that neither team... read more