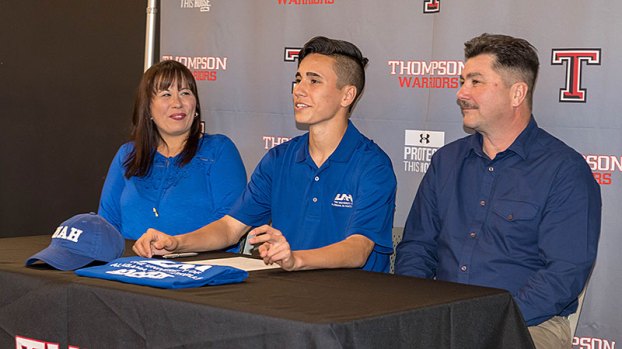 THS soccer player Cole Hadley, center, speaks to supporters after signing a scholarship offer with The University of Alabama Huntsville while his parents look on during a March 14 ceremony in the THS cafeteria. (Reporter Photo/Neal Wagner)

ALABASTER – A Thompson High School soccer standout will continue his career in north Alabama next fall, after signing a scholarship offer from The University of Alabama Huntsville during a Feb. 14 ceremony.

Cole Hadley, who was a scoring machine for THS last season, racking up 10 goals and four assists in 11 games, signed the collegiate offer in the THS cafeteria while surrounded by teammates, coaches, family members, friends and school administrators.

“First, I want to thank my parents for all of this. I definitely wouldn’t have gotten through the recruiting process without them,” Hadley said. “Next, I want to thank the coaches and my teammates for making me the soccer player I am today. Thank you all for coming today, and go Chargers.”

“I was very lucky to coach Cole for three years. Watching him play at the high school level has been an absolute joy,” Wilbanks said. “Even during the summer when the Alabama heat is miserable, the one person who is louder than everyone else, encouraging everyone out there and having a great time is Cole, because he just love to play. Now, to not only see him do this, but to finish his year as a valedictorian, just makes me so proud of him. This is such a great moment, and I’m very proud of you.”

THS boys’ head soccer coach Rusty Cowley said Hadley has been the model athlete during his time with the Warriors.

“What are we going to be missing? For Cole, he is a great example of ‘What does a coach want?’’ Cowley said. “Am I going to get an email about grades? I never have to worry about that with Cole. Who’s going to be at workouts putting their time in, making sure they are progressing and being a good example for the other kids? Again, Cole. Who’s going to pass fitness tests, who’s going to make sure to take the younger kids under his wing? Again, Cole kind of sets the example for all of our younger kids.

“As you go to UAH, my big thing for you would be for you to continue to be a good example for your teammates, young and old, on an off the field,” Cowley added.

By NEAL WAGNER / Managing Editor ALABASTER – A Thompson High School offensive lineman will be suiting up in... read more