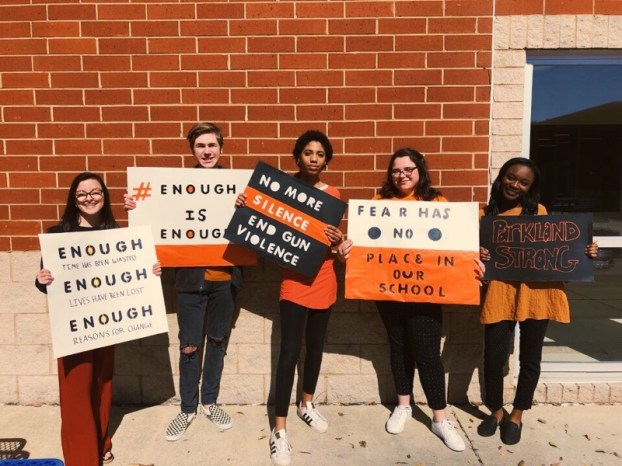 CHELSEA – Exactly one month after the mass shooting at Marjory Stoneman Douglas High School in Parkland, Florida, students at Chelsea High School joined thousands of teenagers across the United States in demonstrating against school violence at 10 a.m. on Wednesday, March 14.

For sophomore Katie Pulmano, the purpose of the #ENOUGH assembly, which was held at the ChHS auditorium, was twofold. Pulmano said she and her friends organized the demonstration to bring an end to school violence while also honoring the lives of the 17 victims of the Parkland shooting, as well as 17-year-old Courtlin Arrington, a Huffman High School student who was killed in a shooting incident at the school on March 7.

Pulmano said they decided to recognize Arrington because of HHS’s close proximity to ChHS.

“It made me sad to learn about something like this happening so close to home,” Pulmano said.

Students wore orange, in accordance with the national movement. Posters displaying phrases like “Enough is enough,” and “The time to change is now,” were hung on the auditorium walls and carried by students. Each victim’s name was read, followed by a moment of silence.

“I want to make sure that this never happens again,” Pulmano said.

Pulmano said the assembly was a joint effort between students, faculty and administration, who were largely supportive and helped with planning in the past few weeks. Originally, she said, the assembly was scheduled to take place, but was later changed.

“About three weeks ago, a group of students asked me for permission,” Trucks said. “We’ve been meeting together to discuss the plans and purpose.”

While spreading the word of the assembly throughout the student body, Pulmano said she was met with mixed reactions. She said many students were supportive, but others opposed the idea. Some students, she said, were fearful.

A few days before the #ENOUGH assembly took place, rumors of a planned incident at ChHS began to circulate. The rumors were investigated by school officials and the Shelby County Sheriff’s Office, and were determined to be unfounded. Pulmano said she believes they were directly connected to the assembly.

“I can’t really imagine any other reason,” Pulmano said.

While news of the assemblies throughout the nation has been met with controversy, Pulmano said the #ENOUGH assembly at ChHS was not about politics.

“I don’t think this is a Democrat versus Republican issue. Everyone has someone who they care about and don’t want this to happen to,” Pulmano said. “It’s important that we ensure safety for students and faculty, so this doesn’t happen to anyone again. Everyone should care about this.”

She also said the assembly at ChHS did not focus on gun-control, unlike assemblies and walk-outs at other schools.

After the event ended, Pulmano said she and the group of students who worked to organize the assembly received an overwhelming amount of support from teachers and peers.

“As we were leaving, a ton of staff members came up and thanked us,” Pulmano said. “When we went to lunch, I would get stopped by people who said I did a great job. It really inspired me.”