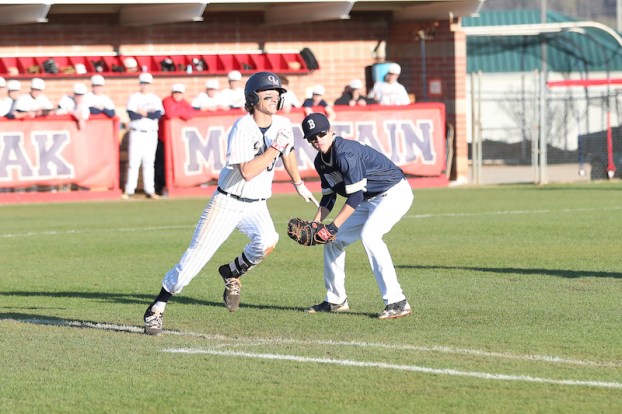 Briarwood and Oak Mountain were both in the first ASWA high school baseball rankings of the 2018 season. (For the Reporter/Dawn Harrison)

Oak Mountain’s 14-0 start, Briarwood, Calera and Helena living up to usual hype and Chelsea breaking down walls yet again are all a part of the first Alabama Sports Writers Association’s baseball poll of the 2018 season.

All five of those teams were found in their respective top 10, while the Pelham Panthers and Thompson Warriors also received nominations for a spot inside the 6A and 7A top 10, respectively.

The highest ranked team, yet arguably still ranked too low, were the Oak Mountain Eagles at No. 2 in Class 7A. The Eagles sit behind defending state champion Hoover at No. 1, who they have already beaten this season.

On Thursday, March 8, Oak Mountain was able to pick up a 3-1 victory over the Bucs to improve to 12-0. That, however, was just one of many impressive victories for the Eagles so far this season.

The Eagles have a win over 6A No. 9 Homewood on their resume and have also defeated defending 6A state champion from Georgia, Charles Henderson, as well as another Georgia powerhouse Pope High School.

After the 14-0 start, Oak Mountain did come back down to earth a bit with back-to-back losses to Thompson and Briarwood. The Eagles are splaying lights out on both sides of the ball and have everything they want to accomplish sitting right in front of them.

Briarwood, Calera, Chelsea and Helena were also highly touted in the first poll of the season and were found in the top six of their respective poll.

Starting with the Huskies and Hornets in Class 6A, both were one spot apart in the standings.

As the defending state champ, Helena got slightly more respect coming in at No. 4, while Chelsea was No. 5.

The Huskies have had some up and downs early in the season, but are still clearly one of the most talented teams in the state. At 8-4, Helena has lost to Buckhorn, Hoover, Huntsville and Vestavia, but have some impressive wins over Bob Jones and Homewood as well as many more.

After a trip to the quarterfinals last season, Chelsea shocked many people. This year they brought back 23 upperclassmen and a lot of people still didn’t believe in them, but they have fired off a 12-3 start to 2018.

Their only losses are to a good Calera team, who they beat, a solid Mountain Brook team just outside of the rankings, and 6A No. 9 Homewood.

Chelsea’s biggest wins include victories against Briarwood, Calera and Prattville. With a strong pitching rotation and experience at the plate, this is a team that could make another impressive run.

Last year, those two were the clear favorites in their area, but this season Pelham is extremely improved at 8-5 already with several key wins and will definitely make Class 6A Area 8 one of the most fun to watch down the stretch.

In the 5A ranks, Briarwood and Calera both have the talent to bring home a state championship in 2018 and its shown off through the first month of the season.

The Eagles are ranked slightly higher at No. 4 in the first rankings of 2018 thanks to a 9-2 start and one of the best pitching duos in the state with Jacob Smith and Tyler O’Clair.

Add Jaxon Butterworth into the mix and offensive prowess from Kevin Dowdell and O’Clair, who has been a monster at the plate, this team has what it takes to make a championship run.

Calera’s only losses are to Chelsea and Pelham, showing how tough they are, but the Eagles have beaten both teams as well and have added impressive wins against Mountain Brook and Vestavia Hills.

Briarwood is having to replace a lot of talent this season, especially on the mound, but the Lions also have several big time contributors back offensively and defensively in the field.

While they have been trying to find themselves early in the season, the Lions have managed an 8-3 start with wins against Oak Mountain, Pell City, McAdory and Hueytown. Their only losses are to Chelsea, Hewitt-Trussville and Mountain Brook.

That impressive run through 11 games, specifically the win over Oak Mountain, saw the Eagles earn a ranking of No. 6 in Class 5A.

Vincent was another team that received a nomination in the Class 2A poll thanks to a solid 6-4 start in 2018.