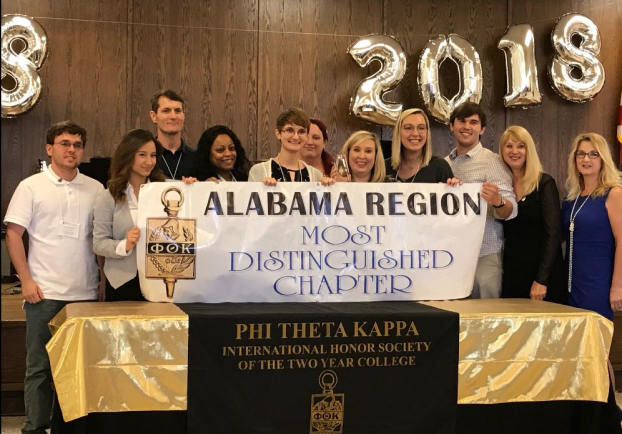 The chapter ranked first out of 33 around the state.

“Our students have proven year after year that working toward this goal is important to them,” Jefferson State Phi Theta Kappa Advisor Dr. Leisl Harris said. “I am so proud of the Jefferson State students for their service to the community and maintaining a level of excellence in everything they do.”

In April, chapter members will travel to Kansas City for their international convention where they will learn how their chapter compares to other chapters around the world via competitive judging of projects. The chapter has high hopes to bring home even more awards.

For the chapter’s Honors in Action project, the students traveled to Houston, Texas to help with the cleanup and relief work for Hurricane Harvey. There, the students worked with All Hands, an international relief agency, and mucked and gutted several houses.

“Our students worked really hard and All Hands informed us we accomplished at least a week’s worth of work in just three days,” Harris said. “The trip really taught the students the importance of serving others and many of them will be lifelong volunteers because of this trip.

“For our college project, our chapter helped host a fundraising dinner for the Horizons School. Horizons serves young adults with learning challenges with an emphasis on teaching independent living life skills. The dinner included a cooking competition among the Horizons students and a silent auction. The really exciting part was five Horizons students enrolled at Jefferson State and are doing great in their classes!”