ALABASTER – Planning to take a leave of absence from her coaching career for a year to have knee replacement surgery and continue raising her family, Melissa Gilbert took the head volleyball coaching job at Kingwood Christian School after deciding to delay the surgery.

“One of the parents had been asking me to get involved for several years to coach,” Gilbert said. “It just kind of fell into my lap and felt like the right time to join the program after all of these years.” 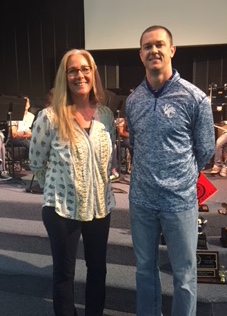 Since the age of 9 years old, Gilbert has been in love with the sport of volleyball and now hopes to take this newest opportunity to inspire a new group of kids.

As an All-State volleyball player in Indiana during high school, Gilbert was ranked in the top-100 volleyball recruits during her senior year.

It eventually led to her joining the University of Alabama at Birmingham volleyball program from 1988-1991. During that span, she was a four-year member of the All-Conference team when UAB was part of the Sunbelt Conference and then the Great Midwest Conference for her senior year with the Blazers.

Those awards were part of a career that saw her become UAB’s career leader in kills with 2,029 as well as aces with 388. Gilbert also has the fourth highest career mark in digs with 1,533 and the fifth highest attack percentage in school history.

While she enjoyed her playing days, Gilbert seemingly always knew she would become a coach thanks to her head coach at UAB, Brenda Williams.

“I’ve always known I would coach since I entered high school,” she said. “Once I got into college, we were almost coached to coach from coach Williams. She had us involved with kids programs the entire four years I was at UAB and really helped us get involved in the community almost as if we were coaches.”

Gilbert then went on to coach in several different formats starting as a trainer at the Southern Performance Volleyball Club, coaching in Japan, then becoming an assistant at UAB and a junior varsity coach at Pelham High School.

Since then she has coached at volleyball clubs, taught lessons and run camps, but now she is the head coach of a high school team and ready to lead a strong group of young ladies with a dedicated approach.

“I don’t really know a lot about the history of how this program has done, so it’s really like a blank slate for me and the school,” Gilbert said. “One of my biggest goals is to try and convince a lot of players to try out for the team that may not have wanted to play in the past.”

She said instituting a junior varsity team would be key and that anybody interested in playing would have fun, while working hard to create a successful program.

“It’s something that will help them become more confident and gather a since of pride for accomplishing something new,” Gilbert said.