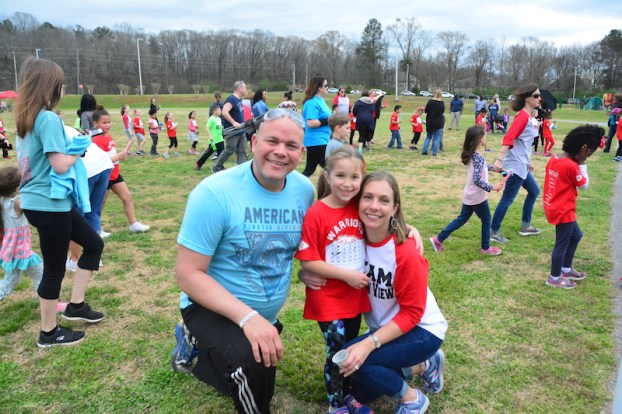 Students at MVES spent part of the day running laps outside of the school to raise money at the 2018 Warrior Run. Teachers were able to make sure that all students were able to participate before the event was cut short because of the weather. (Reporter photo/Amalia Kortright)

ALABASTER – Meadow View Elementary School students spent part of the day learning about physical fitness and raising money for their school at the school’s annual Warrior Run on Friday, March 16. While this year’s Warrior Run was cut a little bit short due to weather, PTO President Erika Zoebelein said students from each grade were able to run laps in the field outside of the school.

“This is an event where the kids can come out, get some exercise and have a lot of fun,” Zoebelein said.

According to Zoebelein and Physical Education teacher Michael Montgomery, all of the funds raised will go back to MVES. Zoebelein said the school let third graders give suggestions on what specific projects the money would go toward and allowed the rest of the school to vote.

“It was a good opportunity to keep 100 percent of the assets at Meadow View,” Montgomery said.

Earlier that morning, Zoebelein said Student Resource Officer Jamison Lee dressed as a Tyrannosaurus Rex while directing traffic outside the school as a reward for students reaching half of their goal.

“He said he was going to wear a silly costume,” Zoebelein said. “He didn’t know until today what it was going to be.”

Because students reached the goal, Zoebelein said MVES Principal Rachea Simms will also be taped to the wall and the school’s top seller will be able to pie her in the face.

According to Montgomery, the Warrior Run was a good way to build character as well as learn about good citizenship, taking pride in the community and the importance of staying active.

“It gives them a sense of ownership of their school,” Montgomery said.

“The message behind that was learning about how to set goals,” Montgomery said.

To emphasize that message, Montgomery said PE teachers had students write one of their goals on star cut-outs and displayed them on the wall.

Zoebelein said the Warrior Run was a joint effort between teachers, the PTO, the school’s Wellness Committee and the PE Department. Montgomery thanked everyone for their participation.

“We really had a lot of success,” he said.