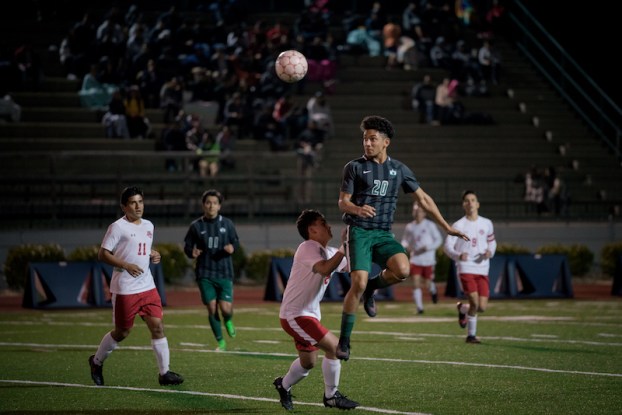 Pelham's Irvin Rodriguez ended the game with two of the Panthers' three goals as they took down Thompson 3-1 in a rivalry win. (For the Reporter/Adam Lee)

Pelham takes back Border Trophy in win over Thompson

PELHAM – The Pelham Panthers took home the Border War trophy on Thursday night, March 15, as they held serve at home against the rival Warriors by a final of 3-1 to advance in the Birmingham Metro Soccer Tournament.

Thompson didn’t lose for lack of opportunities and actually took more shots than the Panthers as the game ping ponged back and forth between the two sides.

The difference came between the two teams’ ability to get their shots accurately on goal. Pelham dominated in that facet of the game putting four of their five first-half shots on goal and six of 10 for the game.

The Panthers broke the ice midway through the first half off a long free kick into the box from Nigel Hilliard. Junior Irvin Rodriguez controlled the ball, inverting his body and sent it into the right side of the net with a sideways scissor kick.

Pelham added to its first-half lead off another free kick as Miguel Trejo bounced the ball off the inner right post from 30 yards out for a 2-0 advantage the Panthers took into halftime.

The two-goal lead enabled Pelham to play possession soccer as they played keep away much of the second half.

The Warriors continued to get shots off, but struggled to put most of them on goal going 3-13 in that department. THS also struggled to convert any of their seven corner kick chances.

Pelham’s Rodriguez put the nail in the coffin with 18 minutes left as he caught the ball off a deflection and sent a burner from 30 yards into the left side of the net.

Pelham was able to improve to 6-4-2 with the win and snapped a two-game losing streak.

With the win, the Panthers set themselves up for a date with Briarwood Christian School for the Division Championship in the Metro Tournament Saturday, March 17 at 7 p.m.

Thompson won’t be in action again until March 20 when they host the Hoover Buccaneers at 7:30 p.m.