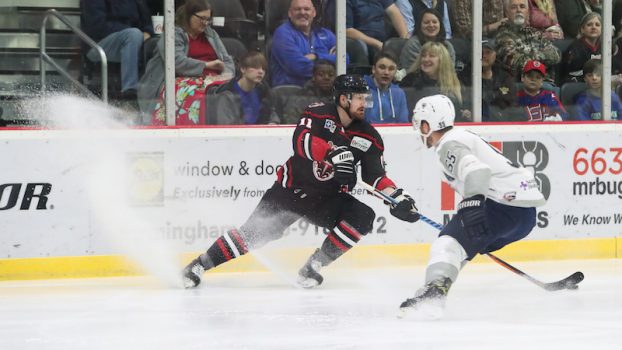 Like going after a matador waving a red flag, the Birmingham Bulls have now chased down both teams sitting between them and the playoffs and bull-dozed right through them.

After taking down Evansville 4-3 on the road on Friday, March 16, by a final of 4-3 in overtime (the Bulls’ fourth overtime game in their last five contests), and returning home the following night to take down Roanoke in a pivotal matchup by a final of 6-1; Birmingham has officially jumped from ninth place in the SPHL (one spot out of the playoffs) to seventh place, passing both Roanoke and Mississippi over the weekend.

With seven games remaining, the Bulls now have 49 points, which is one point better than Roanoke and Mississippi with 48 points, making the final stretch of games like playoff games.

Birmingham, however, has not just won six consecutive games to gain confidence, but have won 13 of 15 games to send that confidence soaring through the roof.

The Bulls have also had the last two players of the week in the league and returned one of their best and most enforcing players to the team last week, Alexander Taulien.

In game one of the weekend against Evansville, the sixth-place team in the league, Birmingham was able to take advantage of an overtime goal from John Rey off assists from Justin Larson and Taylor Dickin to pick up a 4-3 OT win.

It marked Larson’s third assist of the game as he was able to assist on three of their four goals thanks to great vision and always being aggressive and around the puck.

The Bulls had to play catch up in the game thanks to two penalties early in the opening period, both of which ended in power-play goals for Nick Lazorko for Evansville for a quick 2-0 lead in the first six minutes of the game.

Birmingham was able to make up with a power-play goal of its own from Evan Schultz a couple of minutes later to trail by just one at the end of the first period.

In the second it was all Bulls as Josh Harris and Dickin picked up two more unanswered goals to put Birmingham in front 3-2heading to the final period.

After a balanced shooting attack throughout, shots were more lopsided in the third period as Evansville outshot Birmingham 12-7 and tied the game on a power-play goal with 10 minutes remaining.

In overtime, however, the Bulls outshot Evansville 6-2 and picked up the last goal that mattered on Rey’s shot to end it.

Game two of the weekend was clearly a must-win for Birmingham, who came in one spot lower than Roanoke, which had the Bulls one position outside of the needed top eight to make the playoffs.

Back on home ice, the Bulls made no doubt about their mission. Despite being outshot by the Rail Yard Dawgs 44-30, the Bulls were able to pick up a 6-1 win behind a hat trick from Jacob Barber.

Barber picked up the first two goals of the game with 3:41 left in the opening period and just 37 seconds into the second period. His final goal came unassisted with 7:08 remaining in the final period.

Dickin, Mike Davis and Rey accounted for the other three Birmingham goals in the dominant effort.

Goalkeeper Charlie Millin was also on his A game stopping 43 of 44 shots faced in the game. For the weekend he stopped 75 of 79 shots.

Birmingham will now hit the road for five consecutive games between Tuesday, March 20, and Saturday, March 31, before returning home for two straight games April 6-7 to end the season.

By ALEC ETHEREDGE | Sports Editor While many were more than deserving, Pelham’s Justin Allison and Vincent’s Chris Hardie were... read more