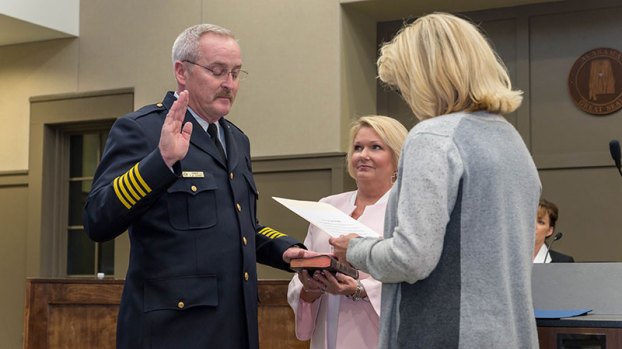 ALABASTER – The city officially has a new fire chief, as former AFD training officer Tim Love was sworn into the position during a March 12 ceremony at Alabaster City Hall.

The ceremony came during a City Council meeting a few weeks after council members voted to hire Love to the fire chief position, and a few days after he officially assumed the role on March 5.

“I’m so grateful he is willing to serve in Alabaster, and I look forward to the great work he’s going to do here,” said Ward 1 Councilwoman Sophie Martin.

Love has a lengthy history in the firefighting field, as he began his career working as a volunteer at the Concord Fire District in November 1982. While there, he worked his way up to the fire chief position before moving on in 2002.

He also worked with the Birmingham Fire and Rescue Department from February 1989 through August 2015, where he retired with the rank of assistant fire chief of operations. After retiring from the Birmingham Fire Department, Love served as the training and safety officer with the Center Point Fire District from July 2015-January 2016 before moving on to the AFD to serve as training officer from January 2016 through November 2017.

Love will earn $108,000 per year as the fire chief, and the council agreed to reinstate 17 days of sick time he earned when he worked with AFD previously.

Alabaster began its search for a new fire chief after former chief Jim Golden resigned from the position in January, citing a desire to focus on his family and health.

Alabaster Mayor Marty Handlon said the city focused on hiring Love because of his many years of service in several different areas of fire service, including his time with AFD.

By ALEC ETHEREDGE | Sports Editor Like going after a matador waving a red flag, the Birmingham Bulls have now... read more