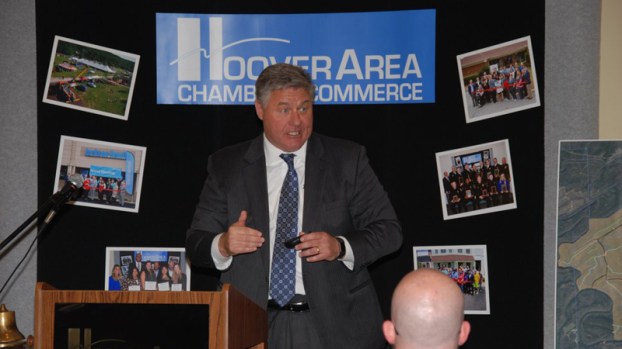 Shelby County Manager Alex Dudchock began his presentation at the luncheon with an economic overview of the county.

The growth indicates that consumer and business confidence is strong, Dudchock said.

A new restroom building and an additional sand volleyball court are being added to the Pelham Recreational Center, and a new hangar has been constructed at the Shelby County Airport.

At Beeswax Creek Park in Wilsonville, improvements will include an additional parking lot, restroom facility, two canoe-in campsites as part of the Alabama Scenic River Trail and a 2.5-mile single-track trail.

A video was shown highlighting the new bald eagle being housed by the Alabama Wildlife Center.

Dudchock also mentioned the new courtrooms being added to the Shelby County Courthouse, the University of Montevallo building a new College of Fine Arts building and a canoe-in campsite being added to Gorman Park in Vincent.

Shelby County is also building a Cahaba River Park southwest of Hoover, with the north sector of the park encompassing 1,339 acres with more than 17 miles of trails.

“You hear about the lilies,” Dudchock said of the Cahaba River’s famous flowers. “In the coming months, you will be able to go look at the lilies at Shelby County-purchased land or Forever Wild land.”

A caretaker for the park’s north sector has moved into county-provided housing, and the sector is scheduled to open to the public by late fall 2018.

The park is located within a 9-mile drive from Interstate 459 in Hoover, Dudchock said.

“It’s convenient to all the folks in this room,” he said.