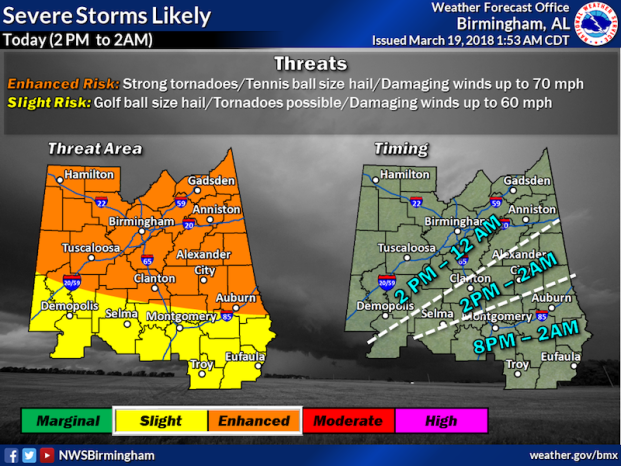 Schools throughout the county recently announced closings in response to the threat of severe weather. The National Birmingham Weather Service initially predicted that storms would hit the Shelby County area between noon and 2 p.m. They are now expected to hit in the evening. (Contributed)

Public school systems, as well as individual private schools, are closing schools on the afternoon of Monday, March 19, in response to the threat of severe weather.

The U.S. National Weather Service of Birmingham originally released an update stating that all of Shelby County is under an enhanced risk of strong tornadoes, tennis ball sized hail and damaging winds up to 70 miles per hour. The severe weather is expected to hit the county between noon and 2 p.m. A later update stated that the storm would likely hit the county between 6 p.m. and 10 p.m., and scattered thunderstorms may develop.

Representatives from Shelby County Schools, Alabaster City Schools and Pelham City Schools all confirmed that the school districts closed at 12:30 p.m., and all after school activities are cancelled.

Hoover City Schools announced that its elementary and intermediate schools will close at noon, and students and the middle and high schools will be dismissed at 12:30 p.m.

In the U.S. 280 area, The Westminster School of Oak Mountain announced its closing at 12:40 p.m. and Indian Springs School closed at noon.

Classes at the University of Montevallo were cancelled as of noon, and all the Jefferson State Community College Hoover campus closed at 1 p.m.

This report will be updated as new information emerges. For more about the severe weather threat, visit the Birmingham National Weather Service’s Facebook page or website at Weather.gov/bmx.