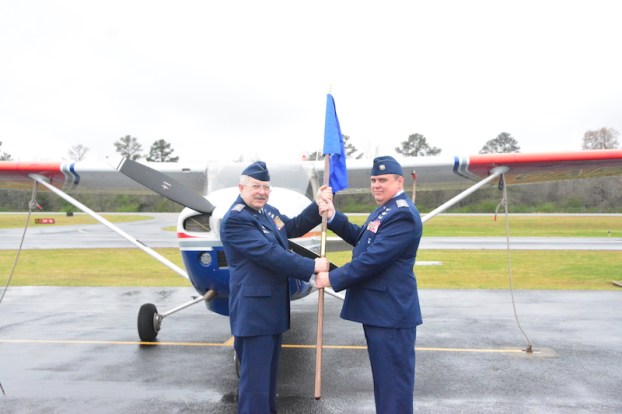 CALERA – Central Alabama Squadron 132 from the Civil Air Patrol celebrated the appointment of its new leader at a change of command ceremony at the Shelby county Airport’s terminal conference room on the morning of Saturday, March 17.

During the ceremony, Major Carl Rossomme of Center Point relinquished command of Squadron 132 to Lt. Col. Mark Traylor of Helena.

In his four years as commander, Rossomme said he had led the squadron in countless search and rescue missions and searches for missing persons. Recently, he said Squadron 132 has become involved with telecommunication between other squadrons in the Southeast region of the United States.

Rossomme said he had been considering Traylor as his successor since before he joined the squadron about two years ago.

“I ran into him several years ago at an air show and convicted him to join the CAP,” Rossomme said. “In the back of my mind, I kept thinking, ‘next commander.’ I didn’t tell him that, though.”

According to Rossomme, it was Traylor’s prior experience with aviation and their former working relationship that impressed him.

“Mark and I were both on staff at the 81st Regional Support Command in Birmingham. I knew him from those days,” Rossomme said. “He was a pilot, he was building an aircraft and he is very well in tune with aviation in Alabama. I thought he was a natural.”

Traylor described being chosen as the new commander as an honor, and said he had big plans for Squadron 132. He said his goals were to recruit more members and have find opportunities for the squadron to develop more service skills.

“We want to take this to the next level,” Traylor said. “We’ve got a good squadron, and I want to make sure it continues to grow and improve.”