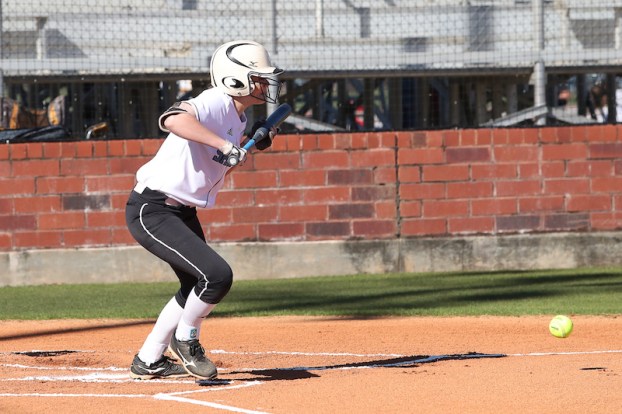 Spain Park’s softball team repeated as Oxford tournament champions with a 1-0 victory over Daphne on Saturday night, March 17. (For the Reporter/Dawn Harrison)

The Jags’ lone loss of the tournament came to Brookwood by a final score of 3-1 in the final pool-play game on Saturday, March 17, but then went on to win three consecutive games, including a 5-4 redemption win against Brookwood in the quarterfinals.

Spain Park’s run to the title included wins of 8-6 over White Plains, 7-6 over Moody, 13-0 over Susan Moore, 5-4 over Brookwood and 1-0 over Daphne in the championship game.

The championship game was fairly uneventful as far as offense went, but Spain Park pitcher Annabelle Widra and Daphne pitcher Karsen Pierce both tossed gems in the circle.

Widra was spot on throughout the game, giving up just two hits while striking out eight batters faced in four innings of action for the complete game.

Pierce gave up just one hit, which was a hit less than Widra, but it was the only hit that mattered in the game.

Still tied 0-0 in the bottom of the third inning, Spain Park was able to start the third with an error that allowed Kate Campbell to reach base. That was followed by the lone Jaguar hit when Caroline Kendrick hit a ground ball to second base that actually was legged out for a single to put runners on the corners.

Kendrick was able to advance to second during the next at bat before Widra walked to load the bases with one out in the inning.

During the next at bat, Bailey Bowers was able to take the fifth pitch she saw in a 2-2 count and hit a ground ball to third base. Daphne’s third baseman tried to get out Campbell at the play, but instead she was able to score safely for the game’s first and only run to keep the bases loaded.

A fielder’s choice at home and a strike out followed to get Daphne out of the jam, but Bowers’ RBI did all of the damage needed.

Despite a double and a single from Daphne in the top of the fourth, Widra was able to get out of the inning unscathed to pick up the 1-0 complete-game win.

Bowers finished the tournament 7-for-12 with seven RBIs and five runs scored. Madie Majors finished 5-for-15 with four runs scored and four RBIs.

Savannah Rogers also had a strong tournament and finished 6-for-13 with six RBIs and four runs scored.

Spain Park is now 20-3 overall this season and 1-0 in area play thanks to an 11-0 victory against Mountain Brook on Thursday, March 15.

By ALEC ETHEREDGE | Sports Editor Like going after a matador waving a red flag, the Birmingham Bulls have now... read more