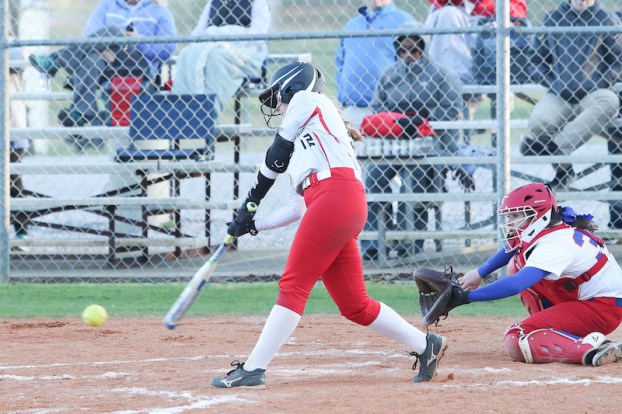 Thompson won the 2018 Calera softball tournament with a 5-1 victory against host Calera in the championship game. (For the Reporter/Dawn Harrison)

CALERA – Thompson is off and flying to start the 2018 softball season and has one of the best records in the state after sweeping the Calera softball tournament from Friday, March 16, to Saturday, March 17, in which the Warriors went 7-0 to win the championship.

Thompson’s first six games of the tournament included wins against Clay-Chalkville, Marbury, American Christian Academy (twice), West Blocton and Homewood, which led to them to the championship game against host Calera on Saturday night.

Unbelievable the five runs scored in the championship game was Thompson’s lowest run total for any game in the tournament, but thanks to Madison Holtzapfel’s no-hitter performance in the circle, those five runs were more than enough in a 5-1 victory.

Holtzapfel went all five innings of the game and allowed one unearned run and one walk during the game, while striking out three batters faced in the win.

Offensively, Thompson got started in the top of the first inning after carrying over loads of confidence at the plate from recent games.

In two of the first three at bats, Kindall DeRamus and Allie Miller reached base with singles to put two runners aboard with one out in the inning.

Miller’s single was followed with back-to-back singles from Madison Bubel and Kennedy Foote to bring in both DeRamus and Miller for a 2-0 lead at the end of the first.

Two innings later, Thompson added to its lead thanks to another big hit from DeRamus. She led the inning off with a double to put a runner on second with no outs in the inning.

She was eventually able to score after an error by the third baseman allowed her to cross the plate. Bubel hit a double later in the inning as well, but was unable to find her way home.

Nonetheless, Thompson held a 3-0 lead heading to the bottom of the third inning.

Thanks to two errors and passed ball in the bottom half of the inning, Calera was able to put up its first and only run of the game to cut the lead to 3-1.

Scoring was quiet again until the top of the fifth inning when the Warriors put the final nail in the coffin.

Just like the first inning, DeRamus and Miller had singles in two of the first three at bats to put runners on first and second with one out.

That was followed by a double from Bubel, which drove in both DeRamus and Miller for the final two runs of the game and a 5-1 advantage.

Calera went down 1-2-3 in the bottom half of the fifth inning to end the game.

DeRamus’ impressive game featured a 3-for-3 performance as the leadoff hitter with three runs scored. Miller also had a nice game going 2-for-3 with two runs scored.

Bubel took advantage of both getting on base and went 3-for-3 at the plate with three RBIs to lead the team.

Thompson is now 20-3 overall this season after the seven tournament wins and is 1-0 in area play with a win against Vestavia Hills already on its resume.