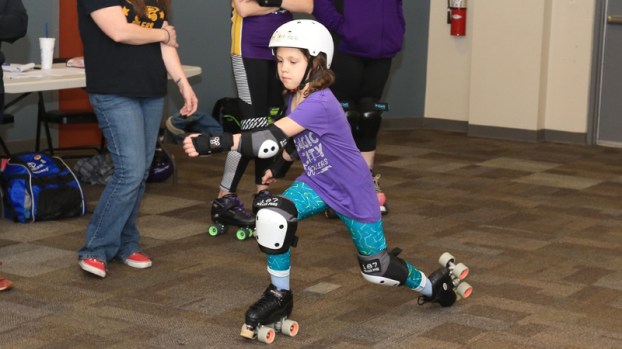 NORTH SHELBY – Dr. Who’s Yer Daddy, Hakuna Mablockya, Rip Cut, Rumble Bee and Trauma Queen may not sound like sociable characters, but they visited North Shelby Library on March 17 to introduce themselves and the sport of women’s roller derby to the community.

The group is part of the Tragic City Rollers league based in Birmingham.

They said that roller derby has evolved from what people saw on television in the past.

Children’s Services Librarian Vanessa Warner introduced the Tragic City Rollers members, who said they were turned onto the sport through the movie Whip It, among other sources.

The Tragic City Rollers explained that a team consists of four blockers and one jammer, who tries to score points by advancing past the blockers.

A game is played in 30-minute halves.

Though the Tragic City Rollers league is for women 19 and older, a junior league has been established for ages 7-18.

Instruction for the junior league begins with the basics, including learning how to fall.

“You don’t even have to know how to skate when you come out,” Rumble Bee said. “We’ll teach you. You’re going to fall a whole lot, and then you’re going to get back up and fall some more.”

One member of the junior league, Day Trip Her, was on hand to give a demonstration on some roller derby basics.

Hakuna Mablockya said women of all body types and from all walks of life are encouraged to participate, and the sport offers an opportunity to create new friends.

When she suffered an injury, her roller derby teammates were there to take care of her, she said, and other noted the health benefits.

“It’s fun, and it’s exercise I never would have done before,” Dr. Who’s Yer Daddy said.

Trauma Queen said she has played several sports, but roller derby is unique.

“This has been the most exciting and challenging sport I’ve ever played,” she said.

“It’s definitely more challenging than I thought it was going to be—mentally and physically,” Rip Cut added.

The first game of the season is scheduled for March 24.

In addition to players, the league needs officials, non-skating officials and fans.

More information can be found at TragicCityRollers.com.

The Tragic City Rollers practice at Skates 280, which is located at 7043 Meadowlark Drive near the intersection of U.S. 280 and Alabama 119.