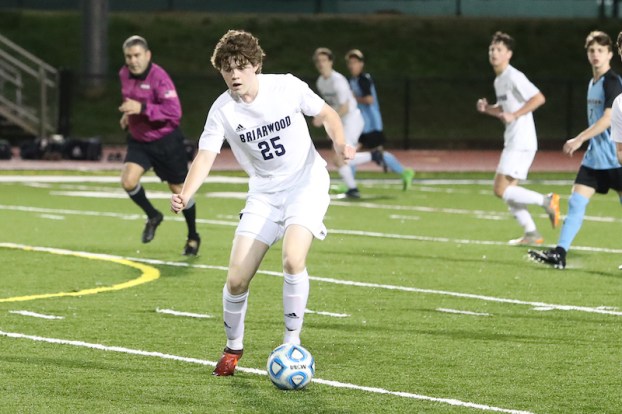 The Briarwood Lions’ soccer team won the 2018 metro soccer tournament and has now picked up a victory in 10 straight games. (For the Reporter/Dawn Harrison)

NORTH SHELBY – The Briarwood boys’ soccer team has looked like the state-championship contender they were projected to look like coming into the season over the last month thanks to a 10-game win streak to improve to 12-2-1 on the season.

The most recent win of that win streak was a 4-0 victory against Shades Valley at Lions Pride Stadium in the Metro Tournament Championship game.

Briarwood’s recent success has vaulted them back to the No. 1 spot in the Class 4A/5A standings after a 2-2-1 start that saw them outscore opponents by a slim margin of 10-6.

Since then, the Lions have outscored their opponents by a combined 59-3 during their 10-game win streak. They have also scored 10 goals three times, scored at least three goals in every game and pulled off eight shutouts during that streak.

In the metro tourney alone, Briarwood outscored opponents 17-1 and handed a previously unbeaten McAdory team its first loss of the 2018 season.

The Lions won that game by a final of 6-0 and went on to beat Leeds 4-0 and Pinson Valley 3-1, before the championship win against Shades Valley.

At this rate, Briarwood, who is already 4-0 in area play, might not lose another regular season game with just four games against teams with a winning record left on the schedule.

Two of those games, however, are against two of the top four Class 6A teams in Cullman (10-3-2) and Pelham (7-4-3), both of which are inconveniently on the road.

Despite what happens in those games, sitting at 4-0 in area play with just two area games left against Shelby County, who they’ve already beaten 10-0, and Calera, who they’ve beaten 5-0, the Lions have the upper hand to win another area championship and take the high seed into the playoffs.

Briarwood is starting to make a statement and will have a chance to make even more noise down the stretch as the team looks to build as much confidence and momentum as possible heading into the postseason starting April 26.

It’s been an impressive showing from a team that features just seven seniors on this year’s squad, but has star talent from young guys in juniors Logan Frost and Hamilton Bowen.

Two of those seven seniors, however, are Bryant Wood and Griffin Felton. Both of those guys have the experience needed as All-County players from last year to help the young team get to where it wants to go.

By ALEC ETHEREDGE | Sports Editor  CALERA – Thompson is off and flying to start the 2018 softball season and... read more