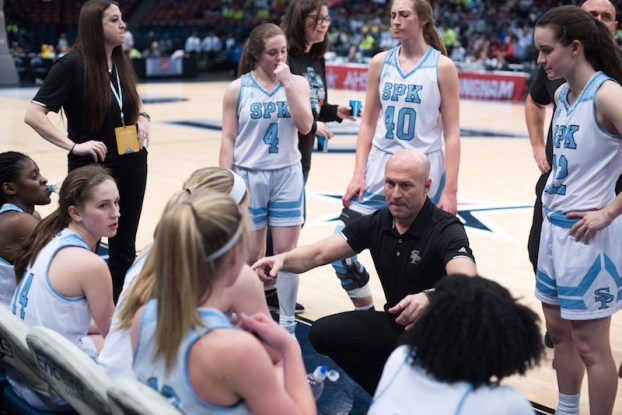 Spain Park head coach Mike Chase has been named the 2017-18 girls' basketball coach of the year after leading the Jags to their first title in school history and picking up his first state championship as head coach. (File)

Chase over: Mike Chase named coach of the year after first state title

HOOVER – A set of double doors across the gym from Spain Park head coach Mike Chase’s office are visible through the window of the office from the comfort of his chair.

Those double doors became a staple over the years of determining what he could expect from his players as they walked from their upstairs locker room down the stairs and through the double doors onto the court.

As soon as they pushed open those doors and walked onto the floor, Chase observing from his office chair through the window, could tell within two seconds exactly what kind of day it was going to be for his team before anybody finished lacing up their shoes or even bounced a ball.

During the 2017-18 season, Chase said he didn’t gaze out at those double doors once because he knew what his team was going to give him—and what they gave him was the head coach’s first state championship in his 22-year career.

“Every day, I knew what was coming down,” Chase said. “They were going to come down and give effort and have a great attitude. If something happened in practice that didn’t go their way they got it fixed really quick and it didn’t affect the other girls.”

His strong leadership of the group that lost in overtime of the 2017 state championship, but was resilient enough to come back and win it one day short of a year later in 2018, made him more than deserving of the 2017-18 girls basketball Coach of the Year award in Shelby County.

While there were many deserving candidates, such as Shelby County head coach Ashley Phillips, Montevallo head coach Tena Niven and Westminster at Oak Mountain head coach Dana Gache; what Chase was able to do with his team by leading them on a redemption path to the state championship and winning all three of their regular-season tournaments was second to none. 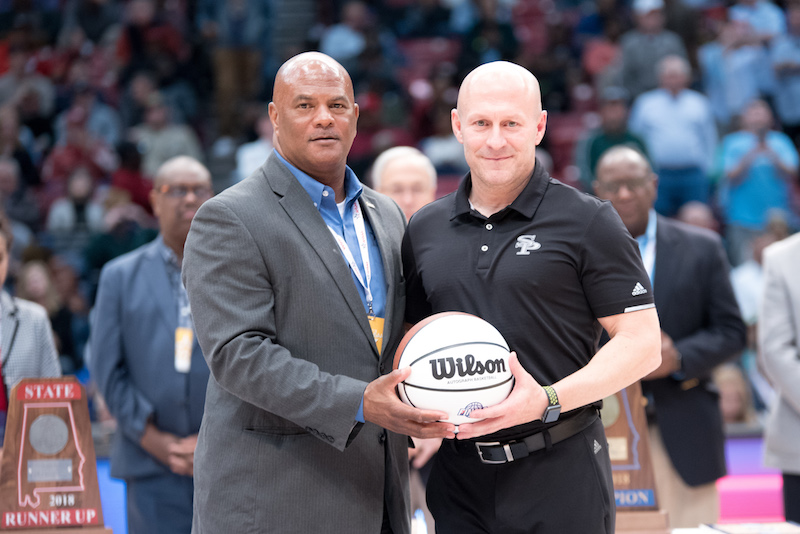 The success was achieved due to a large accumulation of hard work every day since last season’s painful loss in the state championship game.

Chase used the San Antonio Spurs as an example.

After the Spurs lost to the Heat in Game 6 of the 2013 NBA Finals thanks to Ray Allen’s unbelievable 3-pointer to keep Miami alive, they went on a destruction path during the 2014 season to win the NBA championship and finish 60-20 overall.

“If a bunch of veterans in the NBA can use that type of situation as motivation, then it can certainly work at the 7A high school girls level,” Chase said. “That’s exactly what we did.

“There wasn’t a day that went by that we weren’t asking ‘What is Huffman doing? What is Hoover doing? What is Sparkman doing? Are they outworking us today?’ Our mindset was to do whatever it took to get back, and it showed every day at practice.”

With all five of his starting five back this season, Chase said the passion and fire was burning to get back on the court immediately after last season ended.

Normally the Jags don’t get back into preparing for the next season with spring conditioning until after spring break, but he said they were chomping at the bit to get back on the court.

“We actually started back before spring break and it wasn’t my doing, it was them,” Chase said. “When we ended the season last year, even though we lost in overtime, the energy was still there. So I knew that we were going to have a really good chance to get back there.”

Chase said the end of last season completely changed the mindset of his players.

His team got run out of the gym against Hoover to end the regular season and then lost the area championship in rough fashion to Huffman as well.

The mindset, however, changed in the postseason as the Jags won several tight and impressive games against teams that challenged them and even beat them in the regular season. With every postseason win the team grabbed, their mindset changed and confidence grew, before eventually making it all the way to overtime of the state championship game against the team that blew them out at the end of regulation.

That mindset carried over to this season and gave them the confidence that they could beat anybody, leading to the Jaguars’ title run.

The entire season was special to watch unfold before his eyes, but there was one night during the regular season that was one of Chase’s favorite moments—a Friday night game against Hoover.

Just like last year, it was the final regular season game for both teams, but this one was almost even more exciting. The No. 1 Bucs and No. 2 Jags bumped the boys game down to 6 p.m. so the girls could start in the primetime slot at 7:30 on television.

Chase said he was lying in bed a few days before the game and Rick Moody, former Alabama women’s coach, called him to get some info before the game since he was the color analyst.

“I thought to myself, this is what the big boys do,” Chase said with a laugh. “I’ve coached for 22 years in some big games, including the Final Four, but for a girls regular season game that was the best atmosphere I’ve ever been a part of.”

The stands were completely filled and the standing area around the top of the arena was even two-to-three deep with people as the buzz surrounding the game was unbelievable.

The game itself? Nothing short of spectacular.

Hoover went on to win the game by a final score of 58-53, but Chase and his players knew the significance of the special moment.

“It was just really fun and such a good thing for girls basketball.” Chase said.

While that game along with Chase’s first title and Spain Park’s first ever state championship were all special moments during a remarkable season, the team returns three of its starting five and is already looking forward to next season.

The Jags will lose starting point guard Claire Holt, who was named this year’s county player of the year, as well as starting center Barrett Herring and role player Christen Rushing, but with three of the five starters back, Chase is ready for another big season.

With the return of one of the best players in the state in Sarah Ashlee Barker as a junior, and several other important pieces back, Chase doesn’t expect to have to look at those double doors again this season either thanks to the culture that has changed at Spain Park because of this year’s team.