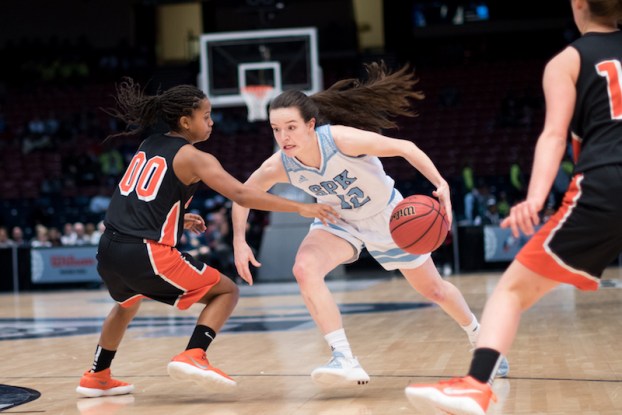 Claire Holt was named Shelby County’s girls basketball player of the year after averaging 21 points per game and leading the Jags to their first state championship in school history. (Reporter photo/Keith McCoy)

HOOVER – At the end of the 2016-17 basketball season, Spain Park’s Claire Holt was clearly disappointed that her team came up short of the state championship loss in overtime to Hoover, but during the post-game press conference Holt carried herself with a sense of poise and confidence.

“We have a young team and a lot of players coming back,” she said after the game on March 4, 2017. “Next year is my senior year so it’s going to be a lot of fun and we are going to be back and even better.”

Sure enough, 364 days later Holt made good on her promise to help lead the Spain Park Jaguars back to the state championship as she spurred a strong redemption season for the Jags to win the 2017-18 state championship by a final score of 51-47.

Holt said that brought things into focus and that this year was all about winning the state championship and nothing short of it.

“I promise you we watched that state championship game so many times,” Holt said. “Coach (Mike) Chase watched it an unhealthy amount of times so we knew everything we did wrong.”

Averaging 21.2 points per game, the highest in the county, Holt was an integral part of the Jags’ inspiring run to the championship and deserving of the county’s 2017-18 Player of the Year award.

Holt, who has been a part of the Spain Park school system her entire life and part of the Jags’ varsity girls basketball team since seventh grade, said it was a special moment to end her career on top with a state championship.

“It’s truly a story of starting from the bottom and working our way up,” Holt said. “I remember being in eighth grade and a freshman thinking I could contribute more. Coach Chase made himself available to help me with film and tell me what I was doing wrong. It took a while and I felt like I wasn’t where I needed to be, but then I finally started to pull everything together and it equaled to success.”

She said that success was in large part due to her head coach who did make himself available to help her out over the last six years.

“The fact that we were able to not just get the school’s first state championship despite struggling to even make regionals for the longest time, but also got coach Chase a championship was satisfying,” Holt said. “I’ve been playing with him since seventh grade and I know how badly he has wanted a state championship but never won it. We finally gave him that and I’m glad I could do it before I left.”

The success was also attributed to Holt herself who has always carried around a duffle bag full of equipment such as balls, cones, jump ropes and speed ladder’s ready to put in the work.

“In 22 years of coaching, she is the hardest-working player that I’ve ever coached,” Chase said. “She’s done it.”

Holt, who would wait around for the boys to end practice and also got to know the custodians so she could get into the gym, spent countless hours working on her game throughout the week.

She shot 500 shots four times a week and had a notebook to track her success each day. If she shot 70-100 from three one day, the next she wanted to improve that number even higher.

“I’m undersized and not the most athletic player so that’s how I get my edge,” Holt said. “I don’t get confidence from compliments and awards but from hard work. I see myself as a shooter and you don’t just become a shooter without hard work.”

While she is extremely sad to be leaving her teammates, or best friends, Holt said she is beyond excited to head off to the University of Richmond to continue her academic and playing career.

“It’s so exciting, like unbelievably exciting,” Holt said with a gleaming tone. “Ever since I was a little kid, I wanted to play basketball at a highly touted academic school that also had good athletics.”

The goal I something Holt wrote down and posted in her room when she was younger saying that’s always been the goal.

“My main goal in life to this point has been achieved,” she said. “I am so happy about it, seriously.”

While Holt is headed off on her own to the next level, a part of her legacy will always be at Spain Park High School as no one will soon forget what she and the 2017-18 team were able to accomplish.