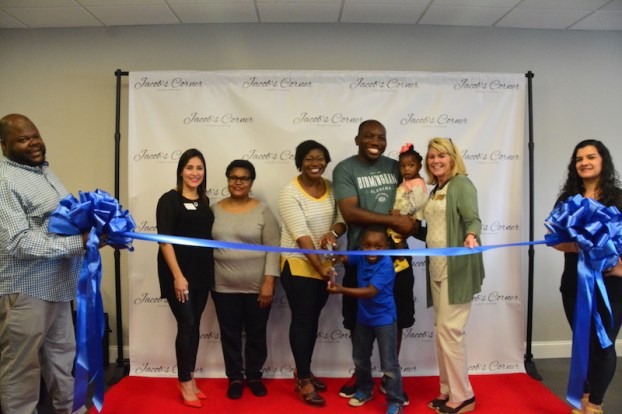 ALABASTER – The Jacob’s Corner Event Center officially opened its new indoor event venue to the public at a ribbon cutting ceremony on the afternoon of Saturday, March 17. Owner Bolaji Kukoyi said he named the indoor venue Madison’s Place, after his 18-month-old daughter.

Kuyoki said he originally named Jacob’s Corner after his older son, who was a baby when it was first established.

“Jacob’s Corner came from my refusal to have (my son’s) birthday parties at Chuck E. Cheese,” Kukoyi said.

For Kukoyi, the decision to add Madison’s Place came after he began receiving requests from clients.

“Everybody said that we needed an indoor space,” Kukoyi said. “Today is the day that we can say, ‘We heard you loud and clear.'”

Before it officially opened, Kukoyi said clients began expressing interest in hosting events at Madison’s Place. While Jacob’s Corner has typically hosted weddings, corporate events, birthday parties and other special events, Kukoyi said Madison’s place will offer a setting with a controlled climate that will work well for seasonal events or inclement weather.

“We’ve already gotten tons of requests right now. This addition makes it better for Christmas parties and corporate events.” Kukoyi said. “A lot of the concerns people have is what happens when it rains. Now, they have options.”

Additionally, Kukoyi said some clients have made plans to rent out both the outdoor and indoor venues because of the additional space Madison’s Place adds.

During the ribbon cutting ceremony, local vendors were onsite with information about their services and free samples. Kukoyi said he saw the grand opening as a way to promote some of the vendors he regularly works with and other businesses in the area.

“I’m a big small business supporter, so we wanted to give them the opportunity to reach out to the community,” Kukoyi said.

Jacob’s Corner and Madison’s Place are located on Plaza Circle in Alabaster. For more information about the new indoor venue or to schedule an event, call 406-8000.

By NEAL WAGNER / Managing Editor ALABASTER – About a month after standing in the spotlight at Huntsville’s Von Braun Center after... read more