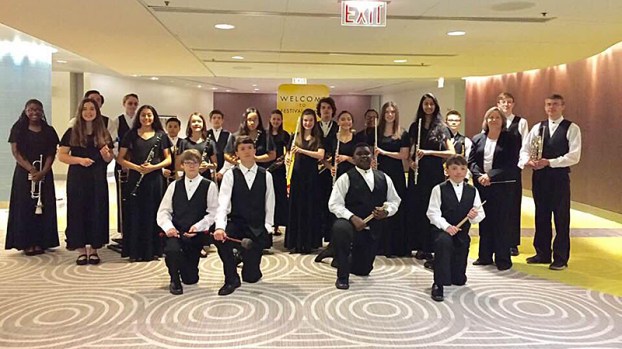 The Kingwood Christian School band recently took a trip to Orlando, Florida, to compete in the Festival Disney, where it earned several recognitions and awards. (Contributed)

In early March, the band traveled to Disney World to perform in the Festival Disney band competition, where band members performed “Dorchester March” by Eric Osterling, “The Emerald Isle” by Dave Black and “Fire Dance” by David Shaffer at the Disney World Contemporary Resort Ballroom of the Americas.

“Our Concert Band is sixth-through-12th-graders. We have 23 band members,” KCS band director Tyra Kutcher wrote in an email. “Our enrollment at KCS in sixth-through-12th grades is 194; therefore, we are placed in Class A. All classes combined, eight concert/symphonic/wind ensemble bands from across the nation performed.”

In addition to earning a superior rating for its performance, the KCS band also earned the Best in Class award for the Class A concert band division, and earned the Bronze Mickey award for recording the third-highest score out of all bands represented in all classifications at the festival.

“We are blessed to share God’s love and hope with these families during a difficult time in their lives,” Kutcher wrote.