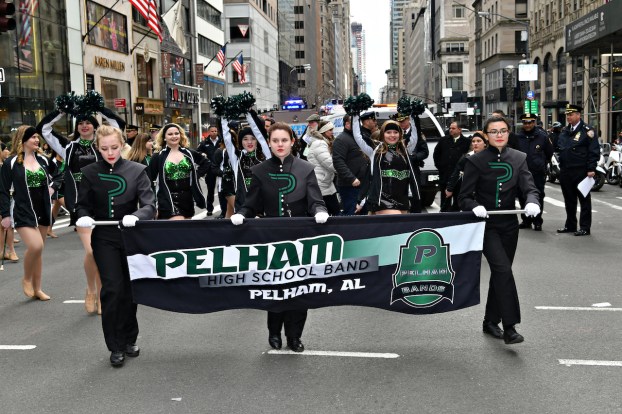 The Pelham High School Band traveled to New York City from March 14-19 to perform in the St. Patrick’s Day Parade in front more than 1 million spectators. The parade took place on March 17 from 10 a.m. to 4 p.m.

Band director Justin Ward said the trip also served as an educational opportunity for the students to sight see and visit national landmarks like the Statue of Liberty. While in New York City, Ward said the students saw the Broadway shows Wicked and the Lion King, visited the 9/11 Museum and Memorial, Times Square and the Rockefeller Center, walked across the Brooklyn Bridge and much more.

About 125 students went on the trip.

“This is just as much about it being a fun and educational experience as it is the parade,” Ward said. “We really wanted to reward them for their hard work this year.”

Ward said a highlight of the trip was having a party on a yacht. The band boosters help fundraise to help offset the cost for students.

“We try to go on a big trip about every other year,” he said. “We want out program to create life changing opportunities for our students. We really want to give them experiences that they maybe wouldn’t have otherwise. That’s really the goal of our program.”