HARPERSVILLE – A Coosa Valley Academy student faces a felony charge after allegedly making threats about “shooting up” a school. 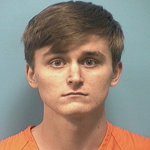 Stephen Chase Edwards, 18, who lists an address off Shelby County 480 in Vandiver, was arrested on March 16 by the Harpersville Police Department and charged with making terrorist threats, according to court records.

Edwards was released the same day after posting $15,000 bond.

HPD Chief Jimmy Macon, who also serves as a school resource officer for CVA, said he was contacted by school administration after a fellow student relayed evidence of Edwards discussing carrying out a school shooting.

“These days, you can’t do that,” Macon said about even mentioning a school shooting in the wake of deadly incidents at schools across the United States.

Such discussions had been ongoing for at least several months, Macon said.

Macon described Edwards as a “loner” who classmates were concerned about.

“They felt very uncomfortable with him, but when they unfriended him, he would become upset,” Macon said.

Police are in the process of searching Edwards’ mobile phone for evidence, Macon said.

A preliminary hearing has been scheduled for April 25 with District Court Judge Daniel A. Crowson Jr. presiding.