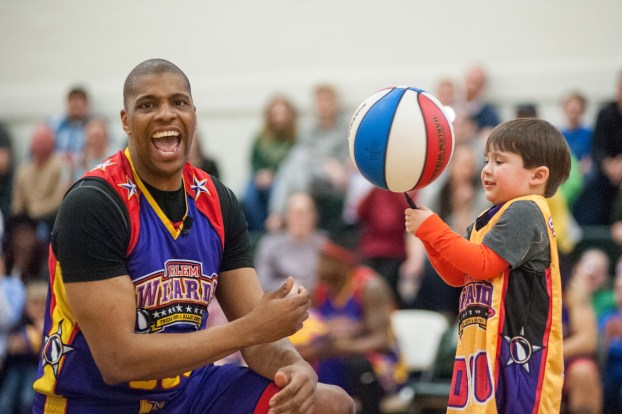 Peyton Estep spins a basketball on a writing pen with the help of a Harlem Wizards player. (Reporter photo/Keith McCoy)

PELHAM – The Harlem Wizards performed for an excited crowd in the Pelham High School gymnasium on Friday night, March 9, as they took on the Pelham Dream Team in a fun-filled game.

The Dream Team, made up of 15 city leaders, teachers and school administrators, played four eight-minute quarters against the Harlem Wizards. The Harlem Wizards began in 1962 and now travel around the world entertaining audiences for schools and nonprofits, which has resulted in millions being raised for fundraisers.

The Harlem Wizards is a team that incorporates fun tricks and interaction with the crowd into their games.

The is the band’s second year hosting the fundraiser. PHS band director Justin Ward said about 400 people attended the event, which was pretty close to last year’s turnout.

“We’re experiencing a lot of growth in the program from the middle to the high school program,” Ward said. “We need new instruments and new uniforms to keep up with the growth.”

“We’re trying to do as many fundraisers as possible to raise the money,” he said. “The event has been very successful for us. Large events like this are better than selling stuff or doing small fundraisers.”

Ward said one of the coolest things about the event is that students get to see their teachers and city leaders in a different atmosphere than what they’re used to.

To see more photos from this event, go to Shelbycountyphotos.com.