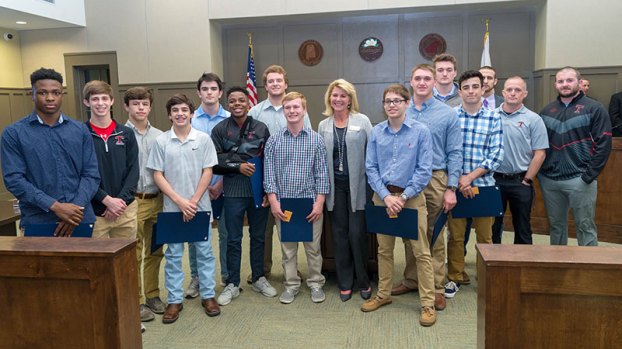 ALABASTER – About a month after standing in the spotlight at Huntsville’s Von Braun Center after capturing its sixth state championship in eight years, the Thompson High School wrestling team found itself as the center of attention again at Alabaster City Hall on March 12.

Alabaster Mayor Marty Handlon invited the team members to the City Council meeting to officially honor them for their achievements.

“We, the city of Alabaster, take great pleasure in recognizing and congratulating the Thompson High School Warriors wrestling team as the 7A state champions,” Handlon said while reading a proclamation in the team’s honor. “Since taking on the role of head coach at Thompson High School, Shawn Weltzin has gone on to build our wrestling program to rival the best in the country. With six state championship titles under his leadership, he must be doing something right.”

Thompson’s Weltzin-led wrestling teams have now won four Class 6A state championships and two Class 7A state championships over the past eight years, earning its most recent on Feb. 17 by finishing 27 points ahead of runner-up Central-Phenix City to claim the 2017-2018 state title.

“I proclaim it is a great day to be a Warrior, and encourage our community to congratulate the wrestlers, coaches and parents of these young men, and to continue to support and encourage these talented young men in their pursuit of future goals,” Handlon said.