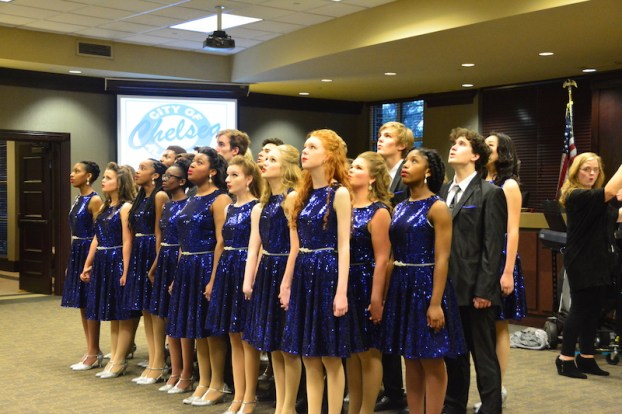 The Chelsea High School "Out of the Blue" show choir sings Whitney Houston's "I Look to You," at a March 20 city council meeting. (Reporter photo/Amalia Kortright)

CHELSEA – Members of the Chelsea City Council voted in favor of increasing the city’s lodging tax and establishing new public posting places at a regularly scheduled meeting on Tuesday, March 20.

“Our lodging tax has been outdated,” Picklesimer said.

The city also passed a resolution to designate the new Chelsea Public Library location on US 280 and the Earl S. Niven Community Center as places where the city will regularly post information about council meeting dates and other important city updates.

The community center and library will replace the city’s old senior lot and the park at the city’s recreation center.

–The Chelsea High School “Out of the Blue” show choir opened the meeting by leading the Pledge of Allegience, singing the National Anthem and performed part of its competition show.

–The city passed a proclamation declaring April 25 as “Bubbles of Love” Day to raise awareness about parental alienation.

–A resolution authorizing the mayor to sign an addendum on behalf of the city with BellSouth Communications, LLC, which is doing business as AT&T Alabama, was passed.

–The city approved an audit report prepared by DeLoach, Barber and Caspers, PC.

–The city’s bills were paid.

CALERA – The excitement was evident on the faces of Calera Intermediate students on Thursday, March 15, as they ran... read more