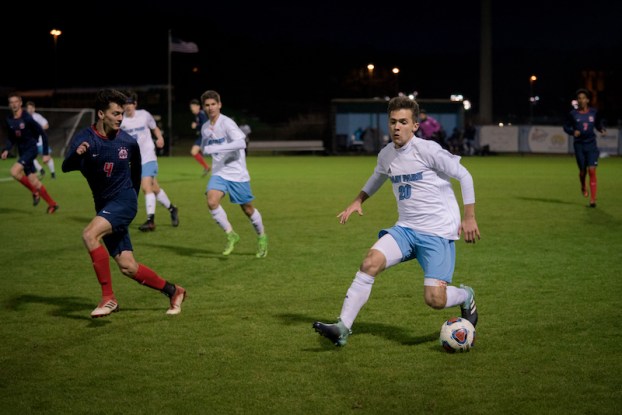 Spain Park picked up a crucial 4-3 win in PKs against area foe Oak Mountain to improve to 1-1 in area play. (For the Reporter/Adam Lee)

Jags pick up 4-3 area win over Eagles in PKs

HOOVER – In what is probably the toughest boys’ soccer area in the state, Mountain Brook, Oak Mountain and Spain Park have to be on their A-game when they meet on the pitch during the regular season.

With all three being ranked inside the top seven of the 7A classification and only the top-two teams from the area making the postseason, each regular season matchup between the three is utterly important.

On Tuesday, March 21, the Oak Mountain Eagles and Spain Park Jaguars met in one of those pivotal matchups.

With the Eagles sitting at 2-0 in area play already and the Jags 0-1, it marked an important game for Spain Park, despite having games left against both teams.

With their one loss coming to the Spartans on the road by one goal, the Jaguars were ready to prove their worth against the No. 3 ranked team in the classification on their home turf.

The Eagles, however, were just as ready to pick up their third area win of the season and it led to an action packed game that went through two overtimes in a 3-3 tie, before Spain Park was able to pull off the shootout win by a final of 4-3 to even its area record at 1-1.

Spain Park was selected to shoot first in the shootout and in the first four rounds, they buried shots into the back of the net, while Oak Mountain connected in just the first and third round and hit the crossbar in the second and fourth round, leading to the Jags’ win.

Early in the game, the Jaguars showed their hunger with the game’s first goal in the first three minutes of the game to take a quick 1-0 lead.

Reece Eberhardt was able to beat his man, then crossed a ball over to Brooks Rice, who continued his unbelievable season by putting in yet another goal.

Shortly after, in the 13th minute of the contest, it was a role reversal as Rice found Eberhardt, who had snuck behind the Eagles’ back line for a breakaway goal he was able to sneak into the corner of the net for an early 2-0 Spain Park advantage.

With just two minutes until the half, Oak Mountain finally got its first break of the game when Spain Park was called for a handball in the penalty area, leading to a PK for the Eagles.

Cody Wells was able to place the penalty kick perfectly behind the goaltender to draw Oak Mountain within one goal at 2-1 heading into the break.

Somehow, despite a battle in the first half, the second half became even more intense thanks to an Oak Mountain player being ejected from the game due to a red card.

It forced the Eagles to play a man down for the remaining 27:20 of the game.

Almost as if it fueled the Eagles, Oak Mountain played even harder for the next 20 minutes of the game.

It not only kept Spain Park from scoring, but Wells eventually broke through the Jags’ back line again and went on to push the equalizer across with eight minutes remaining in the game.

In an action-packed game it didn’t take long at all for Spain Park to snatch the lead back.

On the ensuing kick-off after the game-tying goal from Oak Mountain, Rice had already gotten behind the back line yet again and quickly put a shot toward the goal that wasn’t handled properly by the Eagles’ defense.

A.J. Duggan was in the right place at the right time and quickly got to the rebound to put the go-ahead goal into the back of the net for a 3-2 lead with 7:40 left to play.

Still clinging to life, the Eagles weren’t ready to fold over and quit.

With just more than 1:20 remaining in the game, Oak Mountain was rewarded another penalty kick.

Ethan Acton eventually found the ball off the kick and put a clutch shot in the back of the net for the game-tying goal that sent the game into extra time tied 3-3.

The Eagles had completed a comeback that featured two second-half man down goals to force overtime.

After two five-minute overtimes, the game remained tied, which sent it into penalty kicks before the Jags pulled off the incredible win.

Spain Park is now 6-7-1 overall with four of its seven losses coming by one goal. The Jags are 1-1 in area play and still play Huffman twice, Mountain Brook once and Oak Mountain once.

Oak Mountain is now 6-4-5 with all of but one of their losses coming by one goal. The Eagles are 2-1 in area play and still control their own destiny with games against both Spain Park and Mountain Brook (twice) still left.

By CHRIS MEGGINSON | For the Reporter ALABASTER – A six-run second inning proved to be all the Thompson Warriors... read more