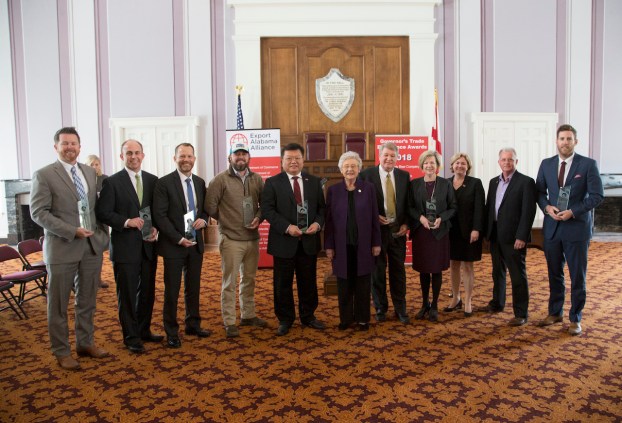 MONTGOMERY— A Pelham business, Keet Consulting Services LLC, was among eight Alabama companies recognized by Gov. Kay Ivey on Wednesday, March 21, for success in selling their goods and services to countries around the globe.

The businesses were given the 2018 Governor’s Trade Excellence Award and represent a diverse swath of Alabama’s business landscape, including high-tech manufacturers, innovative software developers and a craft beer brewer. Ivey honored the eight companies at a ceremony at the state Capitol.

“Today, we celebrate the ingenuity and dedication of eight Alabama companies who recognize that commerce does not end at our state’s borders,” Ivey said. “These companies’ vision to be international leaders in their respective fields is most impressive, and we look forward to their continued efforts in overseas markets.”

The governor also acknowledged that each of this year’s Governor’s Trade Excellence Award recipients are small businesses, a pillar of Alabama’s economy.

Ivey also shared that Alabama’s exports climbed to a record level of $21.7 billion in 2017, with automobiles, aircraft components, chemicals, paper and minerals fueling the increase.

“Exporting is a driving force of Alabama’s economy, which benefits in the form of new jobs and investments for those exporters here at home,” Secretary of the Alabama Department of Commerce Greg Canfield said. “We congratulate today’s winners and are preparing to help them and other companies increase their global sales plans this coming year.”

Hilda Lockhart, Director of Commerce’s Office of International Trade, said this year’s award winners are models for peers which may be looking to follow a similar path in exporting their goods and services overseas.

“Each of these companies are driven by a desire to compete on the global stage, and their creativity, hard work and strategic planning have helped them achieve those goals,” she said.

Hosted at the University of Alabama, the Alabama SBDC partners with eight other universities in Alabama, in a network that leverages university expertise from the respective colleges of business to provide management and technical assistance to small businesses.

The governor issued a proclamation designating March 21 as “Alabama SBDC Day.” The organization has 30 professional business advisers who cover all 67 Alabama counties from 10 field offices.

“The SBDC is a strong resource partner for the Alabama Department of Commerce’s Office of International Trade and its Office of Small Business Advocacy,” Governor Ivey said. “This organization also works closely with ADECA’s Small Business Credit Initiative. In addition, the University of Alabama’s International Trade Center helps companies that are new to exporting learn how to become successful exporters like our award winners. They also help in encouraging these companies take advantage of the Alabama Department of Commerce’s trade expansion programs.”

Here is the full list of this year’s winners:
• Back Forty Beer Company in Gadsden: It was founded in 2009 to bring top-quality craft beer to Northeast Alabama and now brews almost 20 different brands with distribution in five states. In addition, the brewery exported beer to China, Canada, Malaysia and The Netherlands in 2016-2017.

PELHAM – Instead of walking out of class on Wednesday, March 14, as a part of the ENOUGH: National School... read more