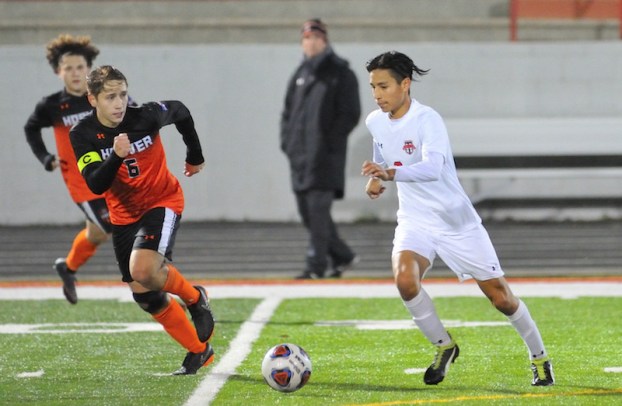 Thompson lost a tough 2-0 battle against area foe Hoover despite outshooting the Bucs in the game. (For the Reporter/Larry Dancy)

THOMPSON – The Thompson Warriors soccer team played host to the 7A no. 2 ranked Hoover Buccaneers Tuesday night, March 20, but couldn’t come away with the upset losing 2-0.

The loss dropped the Warriors, ranked ninth in Class 7A, to a 7-7-1 record that includes an 0-2 record in area play.

After a good showing in the Metro Tournament, Thompson is showing signs of improvement, but they’ll need a stellar record against area opponents the rest of the way if they want to see the postseason.

THS hung with Hoover the entire game which became a defensive struggle after Hoover went up 1-0 in the 18th minute of the first half.

The two teams went the next 60 minutes of game play without scoring. Accuracy and power became the downfall of the Warriors once again as they only put two of their six shots on goal before halftime, and the shots that were put on goal lacked the force to truly threaten the Hoover defense.

The second half was even more back-and-forth than the first as both teams struggled to retain possession. The Bucs and Warriors combined for just seven total shots as scoring threats were stolen or kicked out of bounds to halt momentum.

Hoover removed any doubt as to the result of the contest putting the nail in the coffin with two minutes remaining in the game to take the 2-0 lead for good.

Once again, Thompson outshot their opponent getting 13 shots off, but could only put five of those on goal. Hoover, on the other hand, only took 11, but were able to put seven of those between the posts including their two goals.

The win improves Hoover to 13-1-3 including a 3-1 record in area play. Thompson won’t have to wait long to redeem themselves in the area as they travel to Tuscaloosa County to face the Wildcats on Thursday, March 22 at 6:30 p.m.

By CHRIS MEGGINSON | For the Reporter ALABASTER – A six-run second inning proved to be all the Thompson Warriors... read more