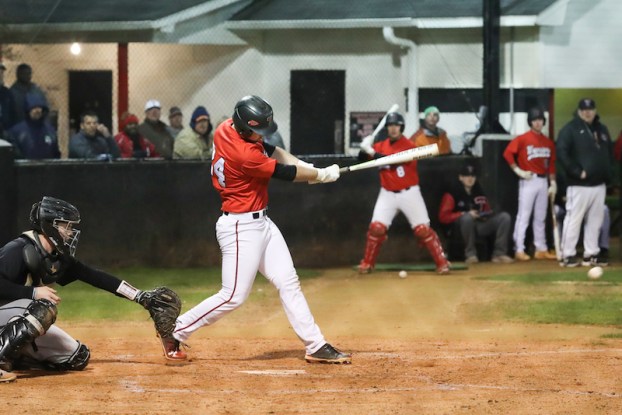 Thompson was able to hang on for a 6-3 win against Mountain Brook after scoring six runs in the second inning. (For the Reporter/Dawn Harrison)

ALABASTER – A six-run second inning proved to be all the Thompson Warriors needed on Tuesday, March 20 to push past Mountain Brook in a 6-3 win at Warriors Park.

“We’ve been swinging the bats really well for the last week and a half, and it carried over into tonight,” said Thompson head coach Pat Hamrick. “We got some timely hits in the second inning and were able to score some runs. I wish we could have finished a little better, but it was a tough night to play with the wind in your face and the sleet.”

It was a cold, rainy and windy night, but in the bottom of the second the Warriors heated up offensively.

A passed ball on a strikeout allowed Colby McClain to reach with one out. Nick Walker followed with a single, and then an RBI double by Myles Brown plated the Warriors’ first run.

Nick Freeman and starting pitcher Breyson Edmonson followed with two-run singles to build a 5-0 lead. McClain then added an RBI single to stretch the lead to 6-0.

In the top of the third, a Clay Stearns double to center field scored Colton Yeager and put Mountain Brook on the board with its first run.

Thompson loaded the bases in the fourth, but after a play at the plate, Mountain Brook worked out of the jam.

Edmonson hit the first two batters he faced in the fifth inning, and Mountain Brook capitalized, as Yeager scored on a RBI fielder’s choice by Tyler Imig. The Spartans went on to load the bases with two outs, but Edmonson got out of the jam with a ground out to third.

Will Morris took over on the mound for the Warriors in the sixth inning. He allowed a walk and a hit before retiring the Spartans in the sixth.

After Morris struck out Joe Saia to lead off the seventh, Thomas Graham reached on an error, and then moved to third on a wild pitch. Phillip Bethea then singled in the Spartans’ third run of the day.

With two outs, Andrew South relieved Morris and struck out his first batter faced, but a passed ball on strike three extended the inning and loaded the bases. South got Yeager to pop up to center to end the game and collect the save.

J.C. Parker led Thompson with a 3-for-4 night at the plate, while Brown finished with two hits. Five Warriors had one hit apiece. For Mountain Brook, Graham an Bethea each had two hits and five other players had one each.