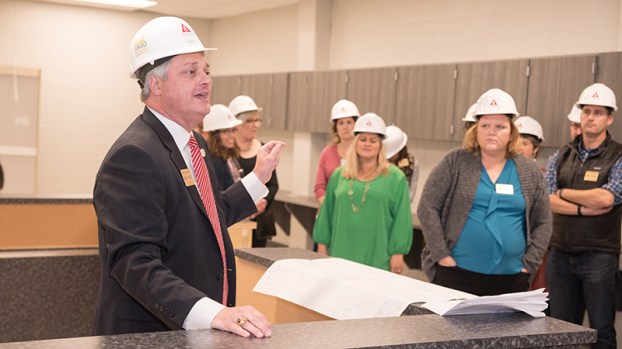 ALABASTER – Alabaster’s school superintendent now has a longer contract with a slightly higher salary – and plenty of praise from Board of Education members – after the School Board voted to approve the new contract during a special-called March 21 meeting.

School Board members voted unanimously during the meeting to extend Superintendent Dr. Wayne Vickers’ contract by one year, meaning his contract now extends through 2023. Through the new contract, Vickers also will see a 2-percent raise on his $180,250 salary beginning in May, and will also be entitled to any raises approved by the Alabama Legislature during its 2018 session.

The new contract came after the School Board conducted a performance review for Vickers, which was “positive all the way around,” said School Board President Adam Moseley.

After voting on the contract extension, School Board members praised the work Vickers has done since coming to Alabaster from Saraland in 2013.

“There is no doubt in my mind that we’ve got the best superintendent in the state of Alabama,” said School Board member Ty Quarles. “It’s one thing to be a bright and intellectual individual, but it’s another to be able to connect with people, and we have both of those things with Dr. Vickers. We couldn’t pay you what you are really worth.”

Board member John Myrick said he has worked with many superintendents over the years, and praised the work Vickers has done in Alabaster.

“In the different climates I’ve worked in, I’ve got to say that it’s just so nice to have you here,” Myrick said. “I can’t say enough about the good job you’ve done here.”

Moseley and School Board member Linda Church said the school system has seen success quicker than they initially expected.

“All of our thoughts and hopes have come true, and it’s because of your work and because of the way you’ve handled things,” Church told Vickers.

“When we set out to form the school system, I thought we would be successful, but never in my wildest dreams did I think we would be where we are now just five years after forming,” Moseley said.

Vickers praised the relationship he has with the city’s Board of Education.

“A school system is only as good as the quality of its school board,” Vickers said. “I appreciate your vote of confidence, and the most exciting thing is that the best is yet to come.”