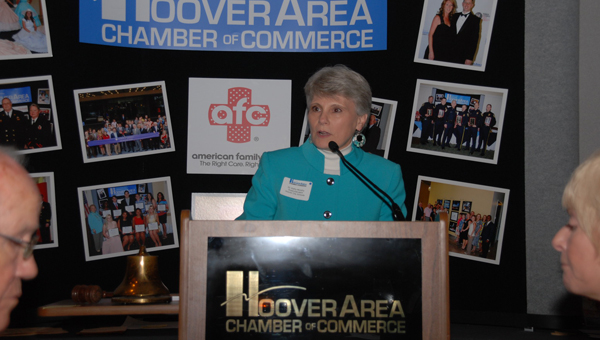 HOOVER – Third-year Hoover City Schools Superintendent Kathy Murphy has continued to excel in the position despite rezoning challenges and other hurdles, according to her most recent evaluation.

The results of the evaluation, with Murphy scoring a 4.3 overall on a 5-point scale, were made public at the March 13 meeting of the HCS Board of Education.

Susan Salter with the Alabama Association of School Boards performed the evaluation for the third year and addressed the BOE at the meeting.

“It’s very difficult for anybody to be evaluated on their performance,” Salter said. “It’s always a tense time.”

The evaluation was based on anonymous surveys of Board of Education members, school system employees who report to Murphy and community stakeholders, including parent-teacher association officers, city officials and representatives of the business community.

Salter called it an “ever-evolving” and “360-degree” evaluation.

“Nobody is a rock star in every category, but Dr. Murphy has blown the top off the evaluation,” she said.

A score of 3 represents meeting expectations, 4 is above average and 5 is demonstrates excellence.

The score was especially high considering Murphy is in her third year, Salter said, when scores usually begin to fall after an initial “honeymoon” period has ended.

Murphy scored at or above 4 in all five of the categories reviewed, which were composed of 47 indicators.

Murphy’s strengths were communication, financial management, accessibility, knowledge of the system and education in general, focus on working to improve teaching and learning, and professionalism.

Over the course of three evaluations, Murphy has consistently been highly regarded in the areas of financial management, leadership generally and in the area of professional development, and communication.

Board of Education President Earl Cooper thanked those who gave feedback about Murphy, and the superintendent herself.

“I appreciate you taking on the challenges with energy, transparency and communication, and due diligence,” he said. “You’ve been a great asset.”

Other board members echoed Cooper, including Craig Kelley noting the “monumental” amount of work involved with the position and Deanna Bamman pointing out challenges Murphy has addressed including rezoning.

Murphy said her work has been made possible by the administration as a whole.

“To my staff, those good scores are yours,” she said.

ALABASTER – Kingwood Christian School students between the seventh and 12th grades gathered in the school’s chapel for a prayer... read more