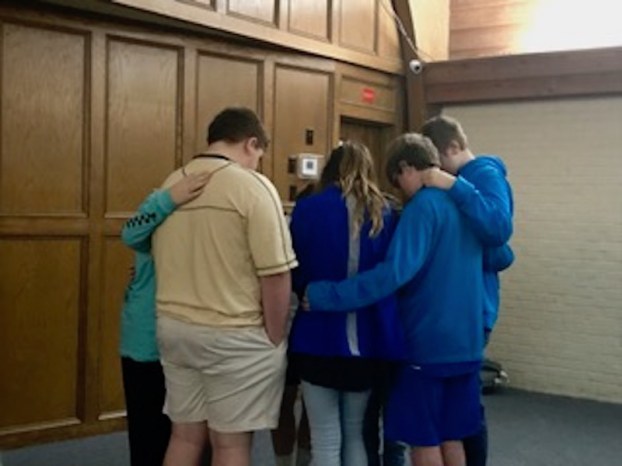 KCS students gather to pray at a vigil held after recent school shootings in Parkland, Florida and Birmingham. (Contributed)

ALABASTER – Kingwood Christian School students between the seventh and 12th grades gathered in the school’s chapel for a prayer vigil at 10 a.m. on Wednesday, March 14. Principal Ruth Gray said the vigil was held in response to the recent school shootings at Marjory Stoneman Douglas High School in Parkland, Florida, and at Huffman High School in Birmingham.

According to Gray, the vigil gave students the opportunity to pray for the nation and its leaders, schools and students. Gray said prayers were also said for those who have been directly impacted by the shootings, as well as “those hurting souls who resort to violence.”

“Each came respectfully and prayed in small groups with sincerity and grace. Some knelt, held hands, locked arms, cried, but all were reverent and openly praying,” Gray wrote in an email message to parents. “It was a beautiful sight to watch God’s children coming together in earnest prayer.”

Bible teacher and Christian Life Fellowship Pastor Mark Davis, who led the vigil, said the names of each victim of the Parkland shooting, as well as the name of Huffman High School shooting victim Courtlin Arrington, were read aloud.

Davis said he saw firsthand how powerfully the vigil affected those who were involved. While demonstrations at other schools in the United States may have been controversial, Davis said there was nothing political about the one at KCS.

“The kids bought into what we were doing. They were ready to take this to God,” Davis said. “It was purely spiritual. It wasn’t anti or pro anything. It was just, ‘God, we’re in a mess.'”

Junior Seger Bayer said he, along with his friends, have been concerned about school violence. While they originally considered taking part in some of the protests, they later changed their minds when they heard about the vigil.

“It was the best thing they could do, which was to show us what to do in times like this,” Bayer said. “I was glad that there was something in response to what is going on. They met us half way.”

KCS parent and high school secretary Stephanie Cochran said there were multiple reasons why she was glad the school did a prayer vigil instead of allowing students to participate in the walk-out protests that were held at other schools.

“For us to point them to Christ, who is the only one who can help us deal with the pain our society is in our society, was refreshing and encouraging,” Cochran said. “From the time we walked in the door, there was nothing but prayer.

In a letter Cochran later wrote to the school’s parents, she thanked KCS faculty and administrators for holding the vigil.

“We are doing something right when we point these kids towards the only one who can bring peace to our hurting hearts, make sense of the violence that we see each day and protect us from the evil that surrounds us,” she wrote. “We often get caught up in what is being done wrong that we often neglect to see the real reason why we have our kids in a Christian school.”