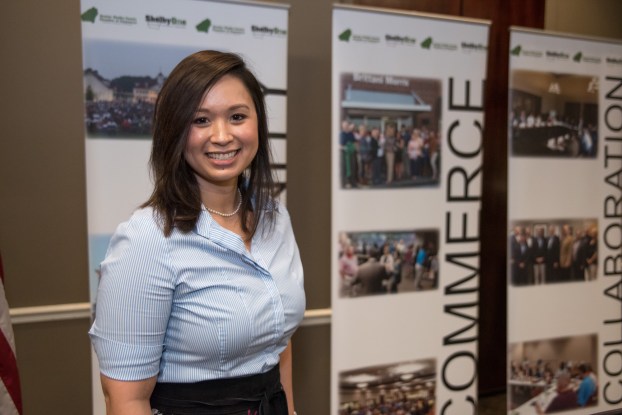 Yvonne Murray, the managing director of 58 Inc., was the keynote speaker at the Greater Shelby County Chamber of Commerce’s March Community Luncheon on Wednesday, March 21, at the Pelham Civic Complex. She provided an overview of what the organization does. (Reporter photo/Keith McCoy)

PELHAM – Yvonne Murray is at the helm of an organization that many believe will play a significant role in shaping the future of Shelby County, but when she tells people that she works in economic development, she said most have a hard time understanding what that means.

“When people ask me what I do for a living, if you have ever watched ‘Friends,’ I am Chandler,” she said, drawing laughs from the audience at the Greater Shelby County Chamber of Commerce’s March Community Luncheon on Wednesday, March 21. “People do not understand what I do for the most part, until we get to layman terms and I give examples of how it matters in their life.”

Murray, the managing director of 58 Inc., was the keynote speaker at the luncheon where she provided an overview of what the organization does. The purpose of 58 Inc., the county’s new economic development entity, is to retain and attract technological, commercial, retail and industrial businesses.

The county’s biggest assets include access to multiple forms of transportation, such as rail, air and interstates, and a diverse workforce that lends itself to a wide variety of sectors.

“In terms of recruiting, our targeted areas are really limitless,” she said.

She also shared some of the challenges the county faces when it comes to economic development. With an annual growth of about 1.7 percent per year, Murray said Alabama needs more people choosing to live in the state. As students graduate from high school and college, more and more are choosing to live in other states instead of going back to their hometowns to work and live.

She also noted that Shelby County closed the year out with an unemployment rate of 2.5 percent. While some may see that number and think it’s a good thing, Murray said it’s actually an obstacle.

“While that looks like a fantastic number and a fantastic measure of health of our county and of our state, that’s a problem because our workforce is very low,” Murray said.

Murray added that the challenge is to show people – such as prisoners re-entering the population and single mothers who have not previously considered working – why they should enter or re-enter the job market.

Of those who do get hired, Murray said a growing problem is finding people who can pass a drug test, show up to work on time and will stay until the workday ends. It is also important to make sure that the workforce has the proper skills.

“It sounds really simple, but it’s really a big problem for employers,” she said.

With companies like Polaris and Mazda coming to the state and bringing 1,100 and 4,000 jobs respectively, Murray said the challenge will be finding employees to fill those positions. With a small workforce, Murray said employees will be pulled away from their current jobs with small businesses.

Rather than landing large companies, Murray said a more strategic way to go about it is to land small businesses offering 100-150 jobs at a time.

The county has some sites in places like Alabaster and Pelham, but they’re on hills and manufacturers need the land to be flat. A more ideal company would be a data center, Murray said.

A data center could go on a 100-acre tract of land and bring 100-150 jobs to the area while having a multimillion dollar impact from the taxes generated from the construction process alone. Murray said another piece of the equation is making sure that these sites are ready when opportunities arise.

“How much of our vacant land has access to broadband?” she said. “That’s the vital question that we’re trying to find the answer to right now.”

She also uses data to understand every community in the county, to determine what resources are needed and what businesses would be the best fit in each market.

In her role as managing director, Murray said she educates the business community about what tax breaks they qualify for so they might have some extra money that could be used to create jobs. In an effort to retain businesses, she meets with business owners to see what their needs are and how those needs can be met.

Allison, Holt named finalists for state’s player of the year

By ALEC ETHEREDGE | Sports Editor Both Shelby County players of the year will be representing the county at the... read more