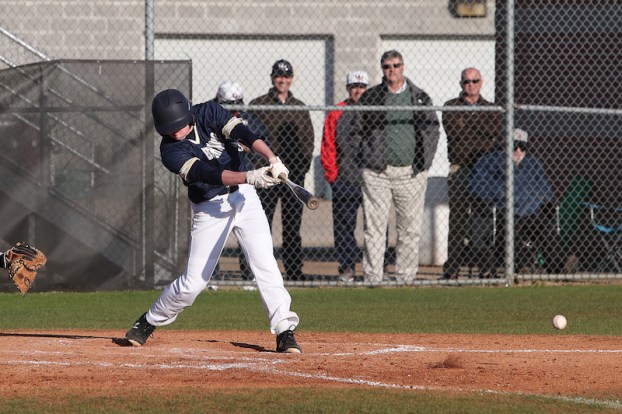 NORTH SHELBY – After battling to a 5-5 tie at the end of seven innings and giving up two runs in the top of the eighth, it looked like the Briarwood Lions were going to start area play with a 7-5 extra-inning loss.

Briarwood, however, had other plans.

Before an out was recorded in the bottom half of the eighth inning, the Lions had loaded the bases thanks to walks from Hudson Hartsfield and Carson Eddy and Michael Hiers being hit by a pitch.

The inning got crazier and crazier as Briarwood never picked up a hit in the inning, but went on to score three runs in the inning for an 8-7 walk-off win.

Parker Scott drove in the first run with a sac fly to right field that allowed Hartsfield to cross the plate.

Wesley Helms then became the second batter hit by a pitch in the inning during the next at bat to reload the bases with one out. That was followed by a walk from Eli Steadman, who was down 0-2 in the count, but battled back to watch four straight balls.

His walk drove in the game-tying run and then for the third time in the inning a batter was hit as Blake McKenna not only got the free base, but drove in the game-winning run thanks to the bases already being loaded.

It wasn’t the first time the Lions had come through in the clutch during the game.

In the bottom of the seventh inning trailing 5-4, Michael Hiers was able to pick up a leadoff double to put a runner in scoring position quickly. After a strikeout, two walks and another strikeout, Briarwood was down to its final out with the bases loaded.

That’s when Bryan Perrian stepped to the plate and was able to hit a ground ball to the shortstop on the first pitch he saw. Thanks to an error, Perrian reached safely and Hiers crossed the plate for the game-tying run to force extra innings.

After a two-RBI double from Sylacauga in the top of the eighth to take a 7-5 lead, it looked bleak for the Lions again, but they stepped up with patience at the plate to pull off the win in the bottom half of the inning.

The thrilling game started in the first as each team was able to drive a run in thanks to RBI singles. Briarwood’s first run came on an RBI single from Hiers, who drove in Sam Hamner.

The Aggies put two more runs on the board in the third inning, but Briarwood answered in the bottom half with three of its own.

Perian and Hartsfield singled and Hamner walked to put the first three batters aboard and load the bases. That was followed by three straight walks to Eddy, Hiers and Scott to give the Lions a 4-3 advantage.

Somehow, Sylacauga was able to get out of the inning without allowing another run.

The Aggies went on to score one run apiece in the fourth and sixth thanks to two errors by Briarwood to take a 5-4 lead before the exciting comeback ensued for the Lions.

Hiers had an impressive day at the plate going 2-for-3 with one walk, two RBIs and two runs scored. Hartsfield led the team with three hits after a 3-for-4 day that featured two runs scored and one walk.

McKenna, Steadman and Eddy also added one RBI apiece, while Scott was the only other player with two RBIs.

By ALEC ETHEREDGE | Sports Editor CHELSEA – Fortune has been on the opposite end of the spectrum so far... read more