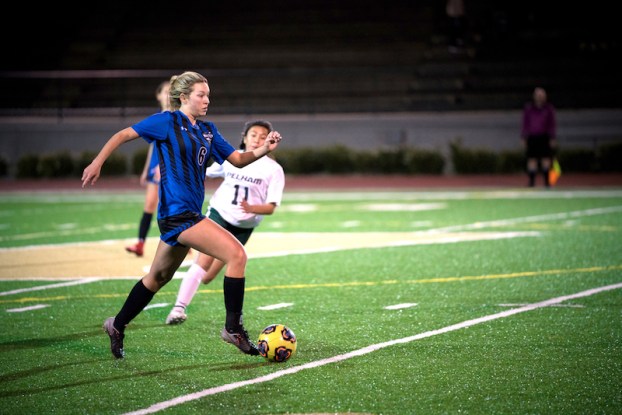 Chelsea's girls soccer team extended its win streak to six games and won the area championship on Thursday, March 22, with a 3-0 shutout against Pelham. (For the Reporter/Adam Lee)

PELHAM – You’d be hard pressed to find a girls’ soccer team playing better than the Chelsea Hornets at the moment.

After a 3-0 win against the Pelham Panthers on Thursday, March 22, the Hornets not only won their sixth game in a row, or posted their sixth consecutive shutout, but won the 2018 Class 6A Area 7 championship.

Having beaten a drastically improved Pelham team twice by a combined 8-0 and Helena once by a final of 8-0, the worst Chelsea can do is finish 3-1 in area play with one game against the Huskies remaining, meaning they have already locked up the area title.

It also means the Hornets have clinched a playoff spot as they look to defend their 2017 state championship and bring home the girls third state title in school history.

Chelsea head coach Jonathan Hammett was excited for his team after the game but had so many great things to say about Pelham head coach Brittany Pollard as she continues to push her team toward a bright future.

It’s shown halfway through the season as the Panthers are 11-3 overall and 1-2 in area play with a playoff berth being a strong possibility. Two of Pelham’s three losses are to No. 4 Chelsea, while the other is to a 7-2 Mortimer Jordan team.

On Thursday night, it was Chelsea’s night and it showed from the start.

A quick 1:38 into the game, Kailey Littleford scored off an assist from teammate Lexie Duca to put the Hornets on top 1-0 in the early going.

The remainder of the first half was played without any damage from either team as the Chelsea defense, that has been lights out with its six consecutive shutouts, and Pelham’s defense both stepped up to not give up any easy opportunities.

It took less than 10 minutes into the second half for that defensive stalemate to come to a halt.

Just 9:44 into the half, Littleford was able to tally goal number two of the game off an assist from Mary Connor Smith to put Chelsea on top 2-0 with 30 minutes left in the game.

That 2-0 advantage was more than enough for the Hornets, but they decided to add one more insurance goal when Smith got in on the scoring off an assist from Claire Guillen with 12 minutes remaining to cement the 3-0 win and the area championship.

Chelsea is now 9-3-1 overall and will return to action after spring break on April 5 when the Hornets will host Broken Arrow High School.

Pelham will pick back up after spring break on April 4 at Montevallo High School. The Panthers will host Helena on April 19 with a win sealing a playoff spot.