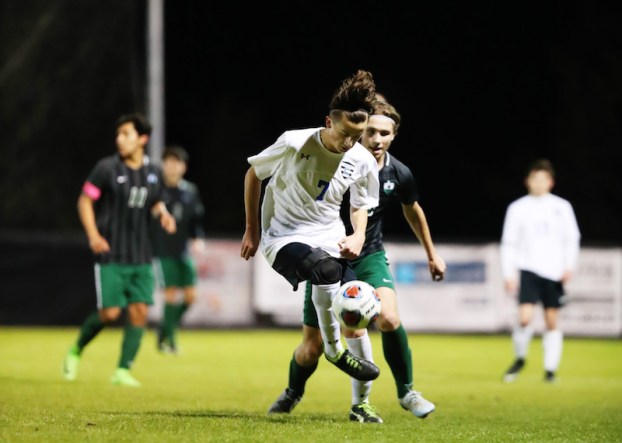 Tony Nettuno dribbles the ball during the game. Nettuno scored one of the Hornets' two goals in the game to help lead Chelsea to the upset win. (For the Reporter/Cari Dean)

CHELSEA – Fortune has been on the opposite end of the spectrum so far this season for the Chelsea and Pelham boys soccer teams and it continued on Thursday, March 22, when the Hornets won their second one-score area game of the season, while the Panthers lost their fourth one-score game of the year.

And that they have.

The Hornets remained perfect (2-0) in the area with a 2-1 victory against the Panthers on Thursday night, while Pelham fell to 1-1 in area play.

The Panthers on the other hand have lost all five of their games this season by one goal or loss, showing they are right on the cusp.

The action in the first meeting of the season between the two didn’t start until the second half as they played to a 0-0 halftime tie, but the final 30 minutes made the scoring worth the wait.

Pelham’s defense has been a nightmare to score on all season, but close to 15 minutes into the second half, Chelsea star Lando Nichols was able to face the nightmare head on with the game’s first goal.

The ball was put into scoring position off a midfield kick from Wilson Parker. His kick eventually found the head of a Pelham defender, but the defender’s header went straight to Nichols for the easy goal and 1-0 lead.

That sparked a furious few minutes of action between the two teams battling for an area win.

Almost exactly 10 minutes after Nichols’ goal, he was back up to his typical offensive tricks. He was able to send a ball to teammate Tony Nettuno, who buried the shot into the back of the net to give Chelsea a 2-0 lead with close to 15 minutes left in the game.

The Panthers, now down two with time running out, knew they had to score in a hurry. Enter Irvin Rodriguez.

Rodriguez, the team’s biggest offensive threat, was able to fire a shot with the ball in midair into the back of the net for a beautiful volley goal with 13 minutes remaining to quickly cut into the deficit and give Pelham a chance down the stretch.

With close to five minutes remaining in the game, the Panthers were flirting with another goal as the team was on the attack and in the offensive zone, but nothing came from it as the Hornets held on to pull off the upset of the No. 4 team in Class 6A.

Both teams will be off from March 26-30 due to spring break, but Chelsea will return to the pitch on Wednesday, April 4, to take on Talladega at home, while Pelham will be at Spain Park that same day for a matinee matchup at 1:30 p.m.

The two will play each other again on Friday, April 13, at Pelham High School with the scheduled start time being 7:30 p.m.

By ALEC ETHEREDGE | Sports Editor CALERA – It’s been a while since the Calera Eagles took to the diamond... read more