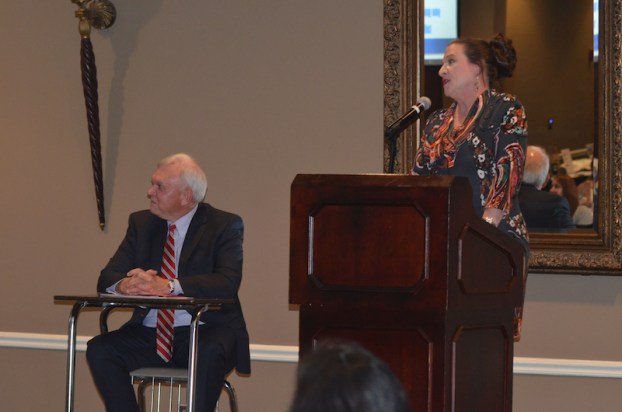 Marla Aldrich, right, served as one of the roasters of Randy Fuller during the second annual Roast and Toast benefitting the Arc of Shelby County on March 22. (Reporter Photo/Graham Brooks)

PELHAM–For the second straight year, a prominent figure of Shelby County became the focal point of jokes and was put in the hot seat all for a good cause.

Although the night was centered on poking fun at Fuller, the real reason for the event was to raise funds to benefit the Arc of Shelby County. The Arc’s mission is “To provide services and support to empower individuals with developmental disabilities and delays and their families throughout their lifespan to live happy, successful and productive lives within a community of their choice,” according to their mission statement.

For $50, individuals were treated with food and drinks, entertainment, a chance to bid on more than 50 silent auction items and of course laughs during the roast of Fuller.

Shelby County Commissioner Kevin Morris served as the roastmaster for the evening as several of Fuller’s colleagues, friends and family members came to pay tribute to Fuller, who has served three consecutive terms as superintendent and will retire at the end of his current term in office this December.

Several old photos of Fuller, some real and others fake, were shown on a slideshow as roasters took turns taking jabs at Fuller while he sat in a school desk.

“Everything Mr. Fuller does he does with a team approach. At Shelby County we have leadership teams, we have actual teams, strategic teams, CSI teams, data teams, discipline review teams, problem solving teams and the list goes on,” Aldrich said poking fun at all the teams Fuller organized throughout the district.

Another slide was dedicated to Fuller awarding him the “Consistency award for always being the last one to close school” which got plenty of laughs from teachers and administrators.

Lastly, Hart poked fun at Fuller for his time spent as a walk-on basketball player during his freshman year at the University of Alabama and presented him with a signed basketball.

“You were a walk-on at the school and I have a good friend who was coach at The University of Alabama in Wimp Sanderson,” Hart said. “I was talking to him this week and I said ‘Wimp, Mr. Fuller is retiring and we’d like for you to give him something.’ So, Wimp signed this basketball and it says, ‘To Randy Fuller, I don’t remember you playing for me but if you say you did OK, Wimp Sanderson.’”

The night concluded with Fuller thanking everyone for all their hard work in helping Shelby County Schools succeed at a high level while also returning some jabs at those who roasted him.

For more information on Arc of Shelby County, visit Thearcofshelby.org.