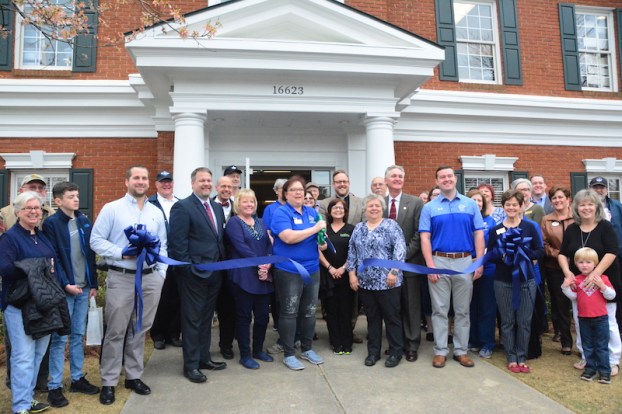 Dana Polk, other library staff, city officials and community members cut a ribbon to celebrate the grand opening of the new Chelsea Public Library building on US 280. (Reporter photo/Amalia Kortright)

CHELSEA – The Chelsea Public Library’s new location officially opened to the public on the morning of Monday, March 26. To celebrate, the city invited residents to commemorate the occasion at a ribbon cutting ceremony that began at 9 a.m.

Librarian Dana Polk said she and other library staff were excited to begin working, and are expecting that the newer and larger building will allow them to serve more members of the community.

“We’re visible,” Polk said. “No one can say that they didn’t know Chelsea had a library.”

Currently, Polk said the new library location has given library staff the room to begin collecting books for a Young Adult Non-Fiction section and books about the state of Alabama in accordance with its upcoming bicentennial.

Polk said she was amazed at how many people came out to the ribbon cutting, as well as to a preview party that was held a few days prior on the evening of March 23.

“At least 50 people came, and everybody left with a smile,” Polk said. “It was to thank everybody who worked so hard to make this happen.”

As a parent, Katrina McGuire said she was happy to have the library so accessible in her community.

“I love that it’s on the main road, so every time we come home from school, we can stop

by here,” McGuire said. “We can also come here on the weekends.”

She said she and her children especially appreciated that the library building is bigger and has an upstairs area and a patio area.

The city began making plans to establish a new library building after it purchased a building from Renassant Bank in March 2017. The new building is almost three times the size of the library’s former location at the Crane House on Weldon Drive.

“This is what happens when people come together for something the community needs,” Picklesimer said. “We want every young person, whether they have it at home or not, to have the best internet, the best wifi and the best technology so that they can be all that they can be.”

Picklesimer also thanked Chelsea residents Jack and Patti Phillips, who donated the funds for the library’s patio in the back of the building. If it were not for them, Picklesimer said the library would not have that addition.

“They came to my office and said ‘We want you to have that patio,'” Picklesimer said. “(Jack) got his checkbook out, and now we have the Phillips Patio.”

Because installations of the library’s phones have not been completed, Polk asked that patrons contact the library by sending a message to the “Chelsea Public Library” Facebook page, by sending an email to Chelsealibrary.al@gmail.com or by calling the Mildred B. Harrison Regional Library at 669-3910.