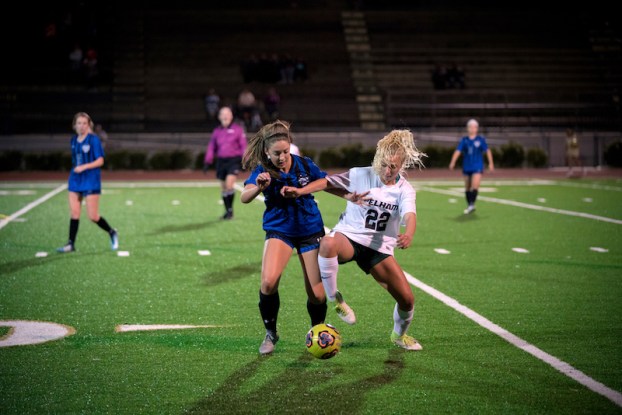 Chelsea's girls soccer team is one of the best in the county again this season and is rolling into the last month of the season. (File)

It’s been an up and down year for several of the county’s best girls soccer teams, but as we hit the last month of the 2018 season heading into the playoffs, several are starting to hit their stride at the right time and it showed in the most recent eurosportscoreboard.com coaches poll released on Sunday, March 25.

There were a total of six teams ranked in their respective classifications and five of the six were ranked inside the top five.

Spain Park highlighted the girls poll with their ranking of No. 3 in Class 7A thanks to wins in five of their last six games, including three wins in a row heading into spring break.

While the Jaguars are 10-3 overall, they’ve picked up two area victories in their last three wins to improve to 3-0 in area play. With games against Mountain Brook and Oak Mountain still left, the Jags control their own destiny when it comes to winning the area title and making the playoffs.

Oak Mountain, who Spain Park beat 6-2 the week before spring break, slid just below the Jaguars at No. 4 in the standings. The Eagles started the season 9-0-2, but have only won once in their last five games, tying in two of them and losing two of them as well.

Like Spain Park, Westminster at Oak Mountain came in at No. 3 in the 1A-3A standings. The Knights are 7-1-1 this season with their only loss of the season coming by a final score of 4-0 to Chelsea.

The Knights started the season with a 0-0 tie against Decatur and responded with seven consecutive wins before losing that matchup with the Hornets.

Indian Springs also found a spot in the 1A-3A standings where they have been all season as the team came in at No. 5 in the poll.

Like Westminster, Springs hasn’t played a ton of games so far this season, but the team is 6-4 overall with several important games after spring break, including a showdown with the Knights on April 14.

Tied with Oak Mountain for the second highest ranking in the county, Chelsea’s girls came in at No. 4 in the Class 6A standings and are arguably the hottest team playing right now.

The Hornets are 9-3-1 overall after six wins in a row and seven wins in their last eight games, but more importantly, the Hornets are 3-0 in area play and have won the area championship to clinch a spot in the postseason.

Winning the area title before spring break was a strong statement to make as Chelsea looks to repeat as state champs in the 6A classification.

Also in the Class 6A standings was a vastly improved Pelham team, who was ranked 13th.

The Panthers are 11-3 overall this season and 1-2 in area play with two losses to Chelsea and a win against Helena. Pelham has now won six of eight with the two losses being to Chelsea by a combined score of 8-0.

Their only other loss of the season came by one goal in a 1-0 loss to Mortimer Jordan.

Having beaten Helena 4-1 already this season, the Panthers will have to do so one more time to guarantee a spot in the playoffs.