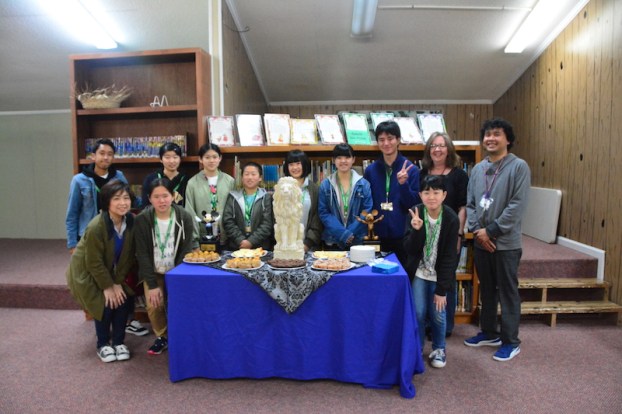 Students from Echizen Town, Japan got a glimpse of what an American private school is like during a March 22 visit to KCS. (Reporter photo/Amalia Kortright)

“It was a privilege and an honor that we had this opportunity,” KCS Principal Ruth Gray said. “Our kids had the opportunity to meet them during chapel. Since there’s a language barrier, our students were able to use nonverbal communication to share our faith.”

According to Echizen Town Board of Education member and translator Syairir Mohd, this is the first time the Japanese exhange students have visited an American private school.

“We’ve always been invited to the local public schools. In Echizen, we don’t have any private schools,” Syairir said.

“We wanted them to get a glimpse of what a private school is like,” KCS parent and Montevallo Sister City Commission member Cindy Boyd said.

Boyd said the exchange program has been a longstanding tradition. Typically, she said students from Montevallo and Echizen alternate sending students each year.

“Our students went over there in 2017, and the Japanese students are over here now,” Boyd said. “They’re experiencing typical American life.”

During their visit to Montevallo, Syairir said Echizen students were able to eat food and participate in activities that are typically associated with living in the United States, like playing baseball and watching football.

He said students were surprised by the fact that most American students do not have to wear uniforms to school and can use their cell phones in class.

“The big thing is that we wanted to experience American life,” Syairir said. “We hope that they get to see the good in America and take something away from it.”

“We’re really thankful for all of the help our sister city has provided,” Syairir said.